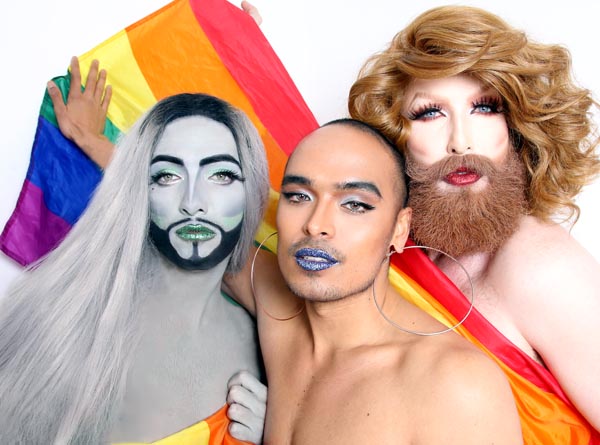 Two queens of the UK cabaret scene, Cazeleon and Gingzilla, join forces with X Factor UK alumni, Seann Miley Moore, to create S.Q.U.A.D. Goals – a dazzling and thought provoking political statement. TIN Nguyen got to chat with them to find out what S.Q.U.A.D. Goals is serving.

THERE is a unique magic present when several uber talented and passionate creatives come together to create. Even moreso when what they’re creating evokes a sense of purpose, all with a lavish heel.

S: S.Q.U.A.D. stands for strong, queer, united, amazing divas and we decided as best friends that we wanted to write a show together. It’s a story about how we all came together to embrace our vibe to find our tribe. It’s a mixture of cabaret, iconic trips throughout herstory – Destiny’s Child, TLC, a cabaret of how we came together as a strong squad.

TIN: So it’s partly anecdotal as well as a production?

C: It’s the whole shebang! We’re gonna give you theatre, extravaganza, drag culture, original songs, tap! It’s absolutely everything, especially now that it’s the fiftieth anniversary of Stonewall. It’s all about coming together as a community. Especially with today, there’s such a divide in our world. We’re bringing to the forefront community, sisterhood and family and putting it to you in a one hour gorgeous show!

TIN: Exciting! And so how did your team actually meet?

G: We all went to the same theatre school in Western Australian Academy of Performing Arts so the likes of Hugh Jackman and Tim Minchin are some of the alumni. Actually, when Seann was in his first year, Caz was in his third year and when Caz was in his first year, I was in my third year! Basically we all united and met up here [in London]. While Seann was on X Factor, Caz and I were just starting our drag career. Cazeleon and I have been doing so much in the cabaret scene [having] won the Adelaide Fringe Festival Award and the Edinburgh Fringe Festival Award for our own shows. So it seemed like we had to band together, Seann as a musician and Caz and my cabaret, as best friends, to create a show.

TIN: So how did the idea of the show come about?

S: We’ve done so many pride [festivals] together we were just like why not create a show together!? It was so natural and came easy. We’ve all been hustling and we were like ‘let’s work together’. It’s all about creating and coming together. Especially with the current political climate, it formed naturally because everyone is banding together for strength and unity.

TIN: What is a highlight of the show?

G: There are a few – I can see two that I love. There’s a moment in the middle where we do a slow nineties RnB jam of the iconic trio that is The Powerpuff Girls which is such a vibe and super fun. And with the fiftieth anniversary of the Stonewall riots, pride is all about loving and being who you are, but it all started about our equality and safety. We all sing a gorgeous trio of Shirley Bassey’s ‘This is My Life’ into Janelle Monae’s ‘Cold War’ alongside images and video clips of our fight as LGBTQ+ people, from where it all started to what is happening today. It’s a beautiful, poignant and touching moment. Caz belts the sh*t out of it! I’m gonna  be crying – I hope I’m wearing waterproof mascara!

TIN: What do you want people who come to your show to take away?

C: Obviously it’s a show and about having fun. But it’s also to educate, to inspire and a safe space for everyone to feel free. It’s like when you’re with your girlfriends, that’s when you can let loose and be you. That’s the idea. It’s the opposite of Mean Girls. We say, there’re no Mean Girls here, everyone can sit with us. It’s a space where you can be yourself and have fun. We’re up there being visibly queer, educating not only the audience but ourselves. It’s all about understanding and respecting everyone and that’s what we deliver as your strong, queer, united, amazing divas, HONEY!

TIN: Brilliant! So where can we see this glamorous show?

S.Q.U.A.D. Goals will be showing at the Underbelly Festival on July 3rd-5th.