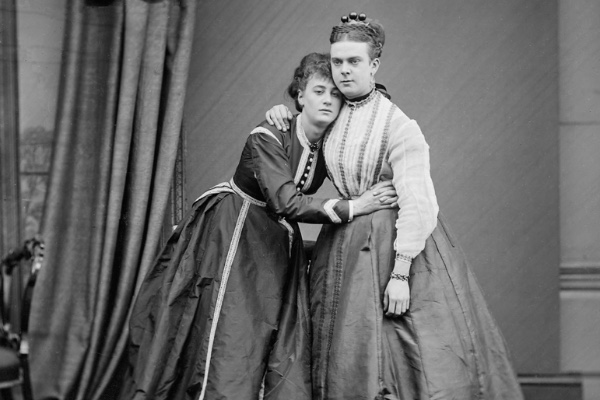 London’s fringe  theatre  re-opens after a lockdown with an intriguing musical offering by the creator of TV’s Taggart.

Playing for 3 performances a week in the new Garden Theatre at the Eagle in Kennington Lane will be Fanny and Stella, based on bizarre events and real characters.

It tells the story of Ernest Boulton and Frederick William Park, two young men who in 1871 were put on trial in London for dressing as women and for conspiracy  to commit sodomy. They donned female attire for amateur theatrical purposes, but often after the show, or even when there wasn’t one, they dressed as women and toured venues in the West End where men met men for sex and where male prostitutes worked.

Amazingly for the times , they were acquitted and decided to tell their story in a one-night show. But what new risks were they running? Jed Berry ( Kinky Boots and Book of Mormon) plays Ernest and Kane Verrall ( Club Tropicana and Sound  of Music ) plays Frederick .

Book and lyrics are by Taggart creator Glenn Chandler; music by Charles Miller and direction by Steven Dexter.

Producer Peter Bull told  Gscene: “ We are taking baby steps  with 3 performances a week , as we venture into open-air socially-distanced performances. We aim to expand after a successful launch” Face masks/coverings must be worn by audience members.

The show runs from 3 – 23  August. Ticket details at www.fannyandstellamusical.com