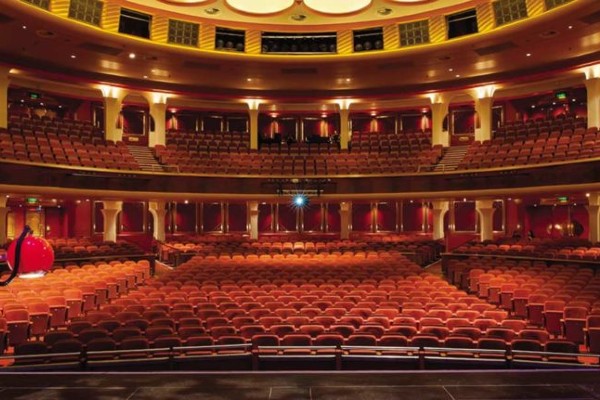 The Theatre Royal Brighton, hot from its successful run of Jamie The Musical, embarks in 2022 with a wide range of shows to suit all tastes.

First up is Fatal Attraction, a stage play based on the film. It’s a tale of seduction and suspense. It stars Kym Marsh and Oliver Farnworth- both from Corrie – and it runs 18-22 January.

The Russian State Ballet Of Siberia offers three well-beloved pieces: Romeo and Juliet, The Nutcracker and Swan Lake from 7 to 9 February. Shrek The Musial gets an amateur airing from Brighton Theatre Group from 16-19 February. And there’ s another musical offering in the shape of Footloose, which stars Jake Quickenden ( winner of Dancing On Ice), and the legendary ex-star of Joseph, Darren Day. It runs 21-26 February.

Puccini’s Madama Buttefly and Bizet’s Carmen – both crowd pleasers for sure – are presented by Senbla and Ellen Kent Productions and are staged on 9 and 10 March. The bestselling book The Da Vinci Code is translated  to the stage in a world premiere production, starring EastEnders Nigel Harman, Hannah Rose-Caton and Red Dwarf’’s Danny John-Jules. It promises a breakneck chase through the streets of Paris – how  they gonna do that? I ask. It runs 15-19 March.

An Hour And A Half Late sounds like my latest blind date, but it’s a funny portrait of a couple whose 5 minutes of candid conversation launches an outpouring of emotions, home truths, wine, nibbles and anarchy. Starring the incomparably funny Griff Rhys Jones and the marvellous Janie Dee, it’s on from 21-26 March.

Beautiful- The Carole King Musical does what it says on its tin- tells the story of the electrifying singer/songwriter with such hits as Natural Woman, Take Good Care Of Your Baby and You’ve Got A Friend. It runs 29 March- 22 April. Noel Coward’s classic comedy of manners and failed marriage, Private Lives, stars Nigel Havers and Patricia Hodge – box-office gold for sure. It’s on stage 12-16 April.

Sheila leads a team-building team to disaster when they are marooned in Sheila’s Island by the author of Calendar Girls, Tim Firth. It stars Sara Crowe, Judy Flynn, Abigail Thaw and Rina Fatania. It runs 19-23 April. The Rise And Fall Of Little Voice is an Olivier Award-winning comedy drama about a girl with 1000 voices. It stars Shobna Gulati ( fresh from Jamie the musical) Emmerdale’s Ian Kelsey and Christina Bianca as the girl who can sing like everyone from Bassey to Garland. It runs 25- 30 April. A must-see show.

Harold Pinter’s 1960’s masterpiece The Homecoming takes to the stage from 2-7 May. it’s a bleak, funny dissection of family and relationships. It stars Matthew Horne and Keith Allen. Cluedo- A New Play is based on the still-popular board game- the ultimate whodunnit. It’s from the director of The Play That Goes Wrong, so expect the same kind of breathless humour. It’s on from 13-18 June.

Back to musicals for Waitress: the story of Jenna the pie-maker who searches for happiness in life and meets the town’s new hot doctor. Chelsea Halfpenny stars. It runs 11-16 July.

And finally in this preview, The Osmonds: A New Musical, is directed by Shaun Kerryson and choreographed by the fabulous Oliver-winner Bill Deamer, who’s featured in Scene magazine. It’s the story of the boys from Utah who became a musical phenomenon. It runs 27 September- 1 October. Look out for reviews of many of these shows in Scene.