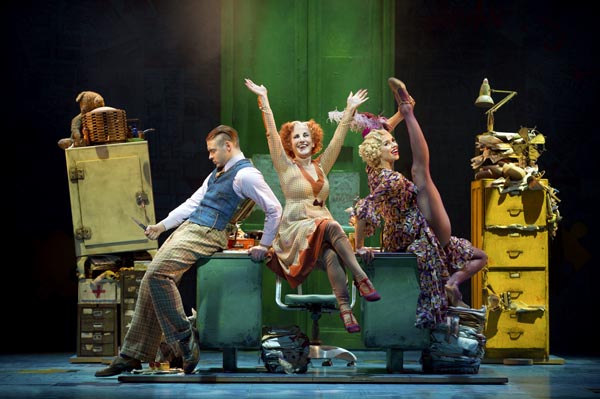 Birds of a Feather star returns to play Miss Hannigan in Annie at Eastbourne.

LESLEY Joseph will star as Miss Hannigan in the smash hit production of the musical Annie at the Congress Theatre, Eastbourne from Tuesday, August 13 – Saturday, August 17.

This production recently ran for an extended season in the West End following a sell-out tour of the UK and Ireland in 2015/16 as well as a recent sell-out season in Toronto.

Lesley Joseph returns to role of ‘Miss Hannigan’ having played the part in this production in 2015/16.

She is best known for playing Dorien Green in the hugely successful sitcom Birds of a Feather alongside Pauline Quirke and Linda Robson. They recorded over 100 episodes over a period of nine years and returned to our screens in 2014 for a further three series.

Lesley most recently appeared as Frau Blucher in the West End production of the Mel Brooks musical Young Frankenstein for which she received an Olivier Award nomination for Best Supporting Actress in a Musical. Her other theatre credits include Miss Hannigan in Annie at the West End’s Victoria Palace and also on national tour as well as the touring productions of Calendar Girls and Thoroughly Modern Mille.

Set in 1930s New York during The Great Depression, brave young Annie is forced to live a life of misery and torment at Miss Hannigan’s orphanage. Determined to find her real parents, her luck changes when she is chosen to spend Christmas at the residence of famous billionaire, Oliver Warbucks. Spiteful Miss Hannigan has other ideas and hatches a plan to spoil Annie’s search…

With its award-winning book and score, this stunning new production includes the unforgettable songs ‘It’s the Hard Knock Life’, ‘Easy Street’, ‘I Don’t Need Anything But You’ and ‘Tomorrow’.

Annie has music by Charles Strouse, lyrics by Martin Charnin and a book by Thomas Meehan. Annie is directed by Nikolai Foster with set and costume design by Colin Richmond, choreography by Nick Winston, lighting by Ben Cracknell and sound design by Richard Brooker. Annie is produced by Michael Harrison and David Ian.