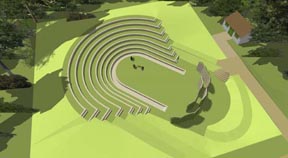 A disused bowling green will be turned into an open air theatre following planning permission being granted by Brighton & Hove City Council this week.

THE FORMER green in Dyke Road Park will be landscaped to form an amphitheatre shape, with a three-metre acoustic wall to dampen noise during performances. Lighting for performances will be set up as required.

Highest parts of the amphitheatre will be just 1.5m above the existing footpath, with the stage about the same depth below and a seating capacity on grass terraces for 425 people.

The application was originally deferred by the planning committee last April in order to clarify how many performances would take place.

Permission now allows performances up to 10pm, Monday to Saturday and 6pm on Sunday and they may take place up to six times a week or 22 times per month.

The amphitheatre will also be a Brighton Festival and Fringe venue and when not in use it will be a sitting-out area for the general public.

Wifi will be installed in due course and the adjacent Pavilion will serve as offices for production staff.

The green was closed by the council in 2013 to save money following dwindling bowls club membership.

Chair of the planning committee Cllr Phélim Mac Cafferty said: “Councillors voted unanimously to grant the Brighton Open Air Theatre. It will bring an exciting new venue to the cultural offer of the city.

“In a fitting memorial to the late playwright Adrian Bunting, it will offer a unique stage for theatre and the spoken word in the open air. The city’s younger actors will have an extra venue where they can tread the boards and gain confidence in the performing arts.

“A valuable new asset has been brought to the local community and to the wider city. A suitably sublime and theatrical way to bring people to Dyke Road Park, which will in turn help it survive and thrive. I wish it every success.”