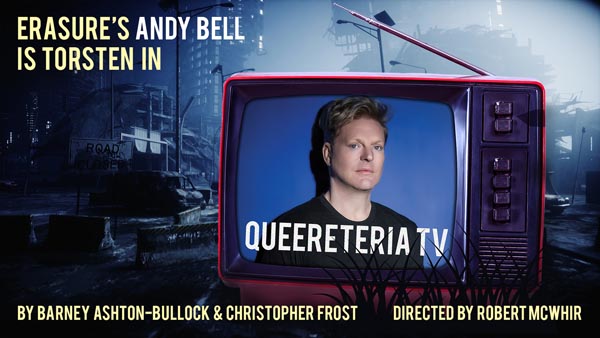 IT’S very difficult to describe exactly what type of show this is, as it doesn’t ever really let you figure it out. Written by (and featuring) Barney Ashton-Bullock with music by Christopher Frost, this is by far one of the oddest shows I have ever seen. And it was brilliant for it.

Walking into the Above The Stag Theatre, you will see a set reminiscent of a nuclear bomb shelter, but as the story progresses you learn that it was once the renowned centre of queer debauchery, Club Queereteria.

In the present day, however, Lady Domina Bizarre (played by Matthew Baldwin) has taken over the premises in order to air her new TV show starring her, Torsten (played by Andy Bell of Erasure) and Rupert (played by Peter Straker).

The show begins with Lady Domina keeping Torsten, a semi-immortal legend of the British music industry, captive against his will. Throughout the first half of the show, we learn more about how the apocalypse came to pass – now known as the “enfrazzlement” for a better public image.

We are also introduced to Daniel (played by show writer, Barney Ashton-Bullock) who plays Torsten’s love interest, and the backstories of each of the zany characters are revealed to us. The second half of the show plays out as a more straightforward commentary on consumer culture.

Now, this show is not for everyone. The dialogue of the show is baroque and confusing, but if you can tune your mind into how it works early on, you shouldn’t miss a thing.

The plot is rather thin throughout as its more of a funhouse mirror being held up to society, than a narrative story. The dancing/choreography is awkward in places due to the set clearly not being designed for movement, and it felt as if the cast needed just a bit more time to prepare for their debut. However, the acting of Matthew Baldwin is exceptional, the outfits and costumes are distinct and memorable, and the filthy wit of the show is entertaining throughout.

Andy Bell performs most of the songs in the show and aside from a couple that were more distracting than entertaining, the songs are a standout part of the show. The lyrical content of the songs ranges from heartfelt reminisces over past loves, to an entire song dedicated to the post-apocalyptic Prince of England’s preference for lady parts over men’s. No matter the subject matter, the songs remained engaging and hilarious through the entire show.

Queereteria TV is an incredibly strange take on our obsessions with reality television and political misery, and while it is a little rough around the edges at times, it has so much personality that it can be easily forgiven.

The small cast oozes with talent, delivering some of the most intelligent and impressive writing I’ve ever experienced, even when it gets in its own way.

All in all, if you want something completely out of the ordinary that’s going to push you as a viewer, Queereteria TV is a five-star must-see.

Queereteria TV runs at the Above The Stag Theatre in Vauxhall until April 28.