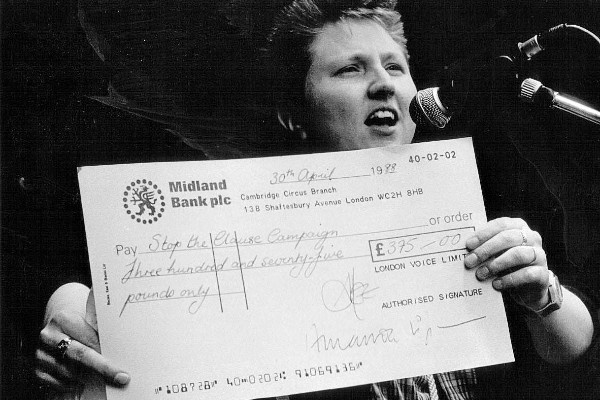 Rose Collis has been an out and proud lesbian writer, performer and activist for over four decades. She has witnessed, participated in and chronicled many key events in LGBTQ+ history, especially those affecting and emanating from the lesbian community. These include early Gay Pride/Lesbian Strength marches; the response to the AIDS crisis; battling tabloid media attacks; the creation of ground-breaking documentary Framed Youth; Gay’s the Word bookshop’s battle with HM Customs; the battles against Section 28 and her four years as the first lesbian co-editor of London magazine City Limits.

Now, this rich, diverse history will become the foundation of this new show — including songs written and performed by her — which, according to the Seaford-based artist, ‘will be very much flagging up the lesbian history’.

Rose says: “Combining acapella songs, humour, archive materials and first-hand testimony, Forty Years Out (And Counting): Performing The Archive will re-visit, reflect and re-enact some of the slogans, the sit-downs, the sorrows — and the solidarity. I hope it will make audiences want to sing, shout, cry and laugh.

“It’s extremely rare to have an original stage show based on authentic, first-hand history which has not been borrowed, nor appropriated by academia.

“My enormous thanks go to Arts Council England, my generous match-funders, the partner venues and all the people who buy National Lottery tickets which provides funding for otherwise unfunded artists like me.”

The show will be directed Kinny Gardner BEM, B.C.A.a, who previously worked with Rose on previous ACE-funded productions, Not Wanted on Voyage and Trouser-Wearing Characters (2016).

You may be able to snap up a free ticket for the Brighton performance of this show, Sunday March 1st 2pm at Jubilee Library.  Check out tickets here:

Forty Years Out (And Counting): Performing the Archive will have its debut performances at Bread & Roses Theatre, London, June 2-8, then moves to the Purple Playhouse Hove, June 18-20. There will also be associated workshops in London, Brighton and Seaford, where people will get a chance to ‘experience the archive’ and join Rose for rare opportunity to explore and discuss more than forty years of history, featuring cuttings, photos, publications, recordings, objects and ephemera from her private archive.

Forty Years Out (And Counting): Performing the Archive will be the cornerstone of a major heritage project set to being in January 2021, drawing on Rose’s extensive archive dating back to 1978 which features rare cuttings, photos, publications, artefacts, ephemera, film footage and audio recordings.

Rose is also one of the featured creatives in the BHCC LGBTQ Workers Forum portrait exhibition ‘ The Exponent of breath’ at Jubilee Library running  until the 29th February, so go check it out and also, of course, one of our trio of muses on the cover of this months LGBTQ History Month Gscene.