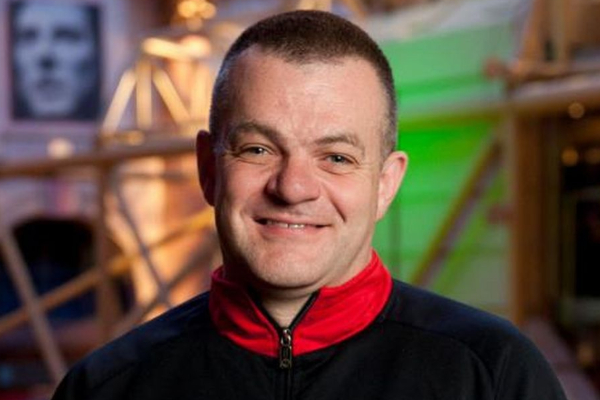 JONATHAN Harvey, creator of TV’s Gimme Gimme Gimme, and a large canon of stage plays and films, says he’s often plagued by panic attacks and anxiety. But sitting cross legged in the green room of the Spire community centre in Kemptown, he appears the epitome of self-confident humour.

He’s about to be cross-questioned by the Marlborough Theatre’s co- artistic director David Sheppeard, so this interview is a bit of a warm-up for him.

Born in Liverpool, Jonathan was a teenage sensation, winning a prize from the Liverpool Playhouse for his first play Cherry Blossom Tree just as he was finishing school. In his second year at university he had his first play staged in London.

“But I decided I’d better get a proper job just in case, so I became a teacher.” He describes Cherry Blossom Tree as a cross between Once a Catholic and A Taste of Honey – centering on a young girl growing up too fast in a Catholic convent school, and the girl’s relationship with a nun Sister Mary Gabriel.

It’s a theme that has often come back in his many works over the years – the role of strong women – particularly mothers.

He was surprised when he won the Evening Standard Most Promising Playwright Award in 1994 but delighted because he got to get photographed with the Best Actress winner Maggie Smith.

“Awards do something for your reputation – they make you more marketable. It doesn’t look bad on your cv,” he jokes.

The plays have come thick and fast over the years. Hushabye Mountain was his first to deal with the issue of HIV/Aids. “It was the late 90’s. One of my friends died and then another friend became ill but was offered combination therapy and is still alive. I became aware of the irony of that unfairness, in a 3-week window of what happened to the two of them. The play covers that and a new relationship which the second man builds. It’s a kind of salvation.”

While teaching in Thamesmead in London, Jonathan started writing possibly his most famous play Beautiful Thing.

“It was the time of the unequal age of consent for LGBT+ and straight people, and the language of the time wasn’t helpful. It’s a simple story with someone ending up happy. It doesn’t feel like a political play but it’s an act of politics.”

“Kathy had directed one of my plays and I wanted to work with her again. She was also script editor on the series.”

“Television is well-paid but everyone has an opinion about a sitcom script. Victoria Wood once said that half-way through making Dinnerladies all she wanted to do was go into a darkened room and scream. I agree. It sends you a bit mad.”

He has clocked up over 260 episodes of Coronation Street since 2004, and still writes for it.

How does the process work?
“Writing is isolating but on Corrie once a month you sit in a room with 17 other writers and the producer and plan 20 episodes. You share your successes and failures; it’s a family feeling. I learn all the time from the other writers, though there’s no collaboration on individual episodes. You write them alone.”

“I kept turning Corrie down, but accepted on the third request. I became obsessed with it.

“The two storylines that stand out for Jonathan are the rape of David Platt and Aidan’s suicide, both of which received great acclaim.

He’s also written for old favourites – he wrote about Jack and Vera Duckworth’s 50th anniversary. The rich lineage of the show’s archive is not as restricting as it might appear and there’s a lot to fall back on.

Corrie is famous for its strong women – going right back to Ena Sharples and Elsie Tanner.

“Tony Warren was a gay man and his characters are camp- he modelled the women on the drag queens going up and down Manchester’s gay area Canal Street.”

Does he have any advice for a young Jonathan?

“It won’t last forever – oh and give up drinking. I suffer from anxiety a lot and I’ve now learned how to deal with it.”

On same-sex relationship teaching and the current furore in Birmingham he is very clear. “I got married a few years ago – the idea that you wouldn’t tell the children in your family about having two dads is ridiculous. I’m appalled by it.”

The work still floods in – he’s just written an episode of Call The Midwife, and has just aired his second collaboration with the Pet Shop Boys – the first being Closer to Heaven and the new work- for actress Frances Barber is Musik.

The central character Billie Trix is kind of Marianne Faithfull figure – a rock icon who has done far too many drugs and has far too many delusions of how good she is. Jonathan says: “the boys and I were still interested in what had happened to her in all these years.”

Theatre is his first love though he now writes novels too. “There are two emotions you can pinpoint in an audience – laughter and tears. You don’t want to write plays where all the audience does is listen.”

No chance of that with his great talent to grab the heart.