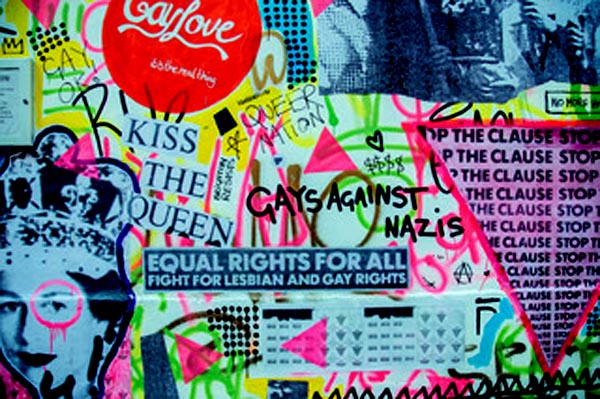 Still buzzing from a jam-packed Brighton Fringe programme and clad in his retro lavender style – a look I’ve come to associate with the man behind the Marly – I sat down with Tarik Elmoutawakil to discuss the challenges and rewards that come with programming queer performance.

Since relocating to the UK three years ago, I’ve been hungry for a queer theatre reminiscent of Buddies in Bad Times Theatre: the bold and unapologetically ‘queer’ theatre that continues to carve its place in the landscape of Canadian art.

Tarik joined the Marlborough Pub and Theatre as a bartender 15 years ago, but in 2008 he ambitiously took charge of the theatre space because it was at risk of shutting down indefinitely. David Sheppeard joined Tarik shortly after that, and then Abby Butcher in 2012, and these three impassioned individuals share the Creative Producer title. Simon Booth (Technical Manager) and Ema Boswood (Programme Coordinator) joined more recently and complete the entirely queer team behind one of the only specifically LGBT+ performance venues in the UK.

Like queer theory itself, the Marly’s artistic mandate is amorphous and constantly shifting with time. Fundamentally, Tarik and his team aim to programme work that explores “intersectional perspectives.”

Every voice within the LGBT+ communities is unique and exhibited at some point at the Marly, but Tarik explained that the venue especially fosters work from trans and non-binary artists because they are often excluded in the mainstream arts scene. The Marly strives for inclusive programming where “minorities and the oppressed can feel safe and represented onstage.”

However, that isn’t to say that anyone and everyone is welcome to perform at the Marly. Is there a limit to exclusivity? Do we want racists and homophobes and sexists onstage? Obviously not. Tarik’s philosophy is to “discriminate against discrimination.” But this can’t be an easy feat.

When asked what challenges come from programming for a festival like Brighton Fringe, Tarik explained that the Fringe is open-access (unlike the rest of the year’s programming) and much of the work is ‘in progress’ when the artist applies. This means that the Marly team may only see the completed show during the final dress/tech rehearsal.

According to Tarik, there have been instances in the past where he discovered problematic details within a show (ie. a line or image that could alienate a certain group of people in the audience) and had to discuss it with the artist. Never overt bigotry, but rather “micro-aggressions that needed to be addressed.” Luckily, most artists have been grateful for the feedback and gladly made the necessary changes to include every kind of audience member that frequents the Marly.

The fact is that some artists need to check their privilege. Even though someone belongs to the LGBT+ communities, and has experienced prejudice in some shape, way or form, they do not then have permission to oppress another marginalised group.

If we step out of the theatre for a second: the assumption is that everyone in the LGBT+ community is open and accepting, but you just have to switch on Grindr to find ‘NO FATS NO FEMMES NO ASIANS’ plastered across ‘MASC 4 MASC’ profiles.

Just like our seemingly inclusive community, white, male privilege remains rampant in queer art today, and venues like the Marly have a responsibility to hold artists accountable for the messages they spread with their work. Who else is going to do it?

At its core, queer art is about taking risks. Identities and ideologies are being challenged and subverted, and people are bound to be offended. But that’s the point – art is supposed to affect its audience. Mistakes might be made and language might alienate, but venues like the Marly open up a dialogue around reductive rhetoric and representation within the LGBT+ communities. As seen in their upcoming (and meticulously curated) Trans Pride programme, workshops and Q&As are scheduled alongside specific performances in hopes of unpacking ideas at play and facilitating much-needed conversations about the work.

But running a queer theatre isn’t all about challenge and intensity – it’s also incredibly rewarding. Tarik revealed that he has met so many of his queer heroes through the Marly, some including: Mykki Blanco, DarkMatter, Kate Bornstein and Split Britches. And more importantly, Tarik finds genuine joy in creating a community hub “where you can live closer to the ideals you want to see in the world.”

When asked to describe the Marly’s future, Tarik envisioned “an environment where queerness is normalised and where people are emboldened by seeing fragments of their identity reflected onstage.”

A ‘queer’ theatre is so much more than just a theatre; it’s a laboratory; it’s a sanctuary; it’s a protest. And in our current political climate, as our government is infiltrated by homophobic, sexist DUP extremists, I can’t think of anything more important than a space that hands a microphone to the voiceless and shines a spotlight on the marginalised. The only way change will come is if we speak up, stand out and listen; and that’s why we need performance venues like The Marlborough Pub and Theatre.