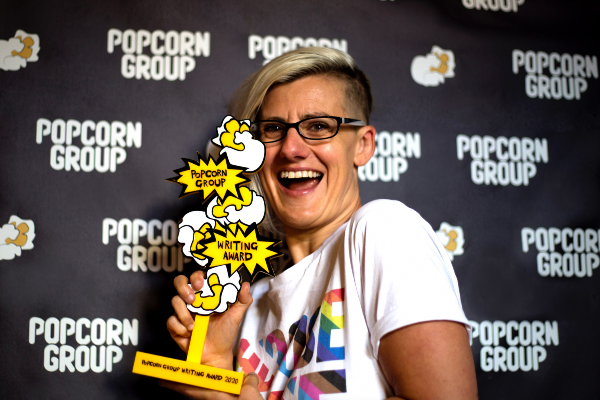 A play about a lesbian couple who fear separation when one of them contracts dementia is the outstanding winner of this year’s  Edinburgh Fringe Popcorn Writing Awards – without being performed there !

Jennifer Lunn wins the award for her play Es and Flo. The Popcorn awards champion fearless work, which questions and addresses current affairs and societal trends and all the plays were  destined for the Edinburgh Fringe, which this year ofcourse has been a casualty of Covid 19.

Es and Flo is a moving story of a lesbian couple who have secretly been in love and together for over 30 years. When Es begins to show signs of dementia, their life together is threatened. It’s a story about generations of women, about choosing your own family, kindness, forgiveness and  discrimination , against which background Flo is determined to not allow the couple to be separated.

As the winner and 3 other finalists are unable to be performed , Popcorn Productions have filmed excerpts from them , which are now free to view on YouTube. They are acted by a stellar cast and though sadly brief are riveting viewing.

Flo is played by Sharon D Clarke and Es by Celia Imrie . Though filmed separately their chemistry in this touching extract is palpable. Flo is caring but angry – angry that she and their partnership don’t exist as far as society is concerned. Celia Imrie is heart-moving as the funny, dry slightly dippy lady who hasn’t yet come to terms with her forgetfulness and treats it more as an annoyance. As Flo tells her “ I choose you but you need to choose me “ in the matter of powers of attorney. I can’t wait to see the whole play, which is so sensitively directed here by Emma Callander.

Little Miss Burden , performed by Saida Ahmed, Ani Nelson and Michelle Tiwo is written by Matilda Ibini.  It’s a powerful  coming-of-age tale that smashes together 1990’s nostalgia, a Nigerian family’s traditions in East London and the tricky, funny truths about living with a physical impairment.

Again, though isolated all 3 actors have a terrific rapport and their comic timing is immaculate. It’s a story of warmth, family bonds and funny hairstyles! I didn’t want this to end either.

Burn by LGBTQ+ playwright Chris Thompson explores love, terminal illness and death and it’s a very modern slant on first dates and hidden secrets , played brilliantly with dry humour and a tragic sting in the tale by Game of Thrones star Kit Harrington and Downton Abbey film star Tuppence Middleton. They spark off each other marvellously.

Daddy, by Camilla Whitehill gives us the nuanced comic genius that is Rory Bremner in the warped world of an ageing comedian , who makes you laugh and cry in a way very reminiscent of Osborne’s Entertainer Archie Rice. It’s a really bouncy piece with a dark underbelly of misogyny , depression and crippling trauma. We only get a few minutes of the play but I’m guessing it’s  dynamite in full.

Popcorn Prodctions , run by Charlotte Colbert and Jessica Malik, develops and produces innovative and provoking content on film, tv and in the theatre.

Let’s hope all these plays get a proper outing soon and the recognition they deserve. Three cheers for Popcorn and Five Stars too !