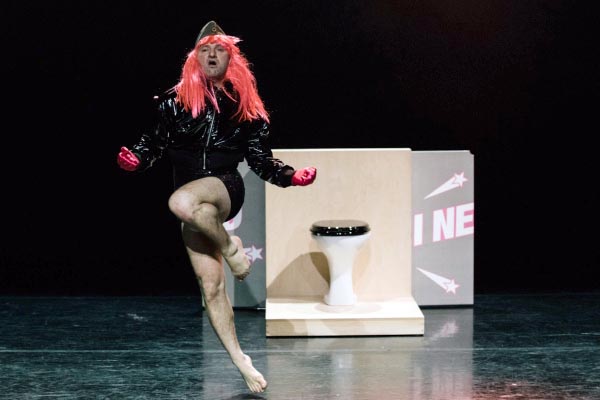 ROCKBOTTOM is the new solo dance piece from Stuart Waters and also his debut as an independent artist.

It’s a combination of staccato narratives segued into passionate, desperate, urgent segments of (suggested) auto biographical stories of the dancers’ personal struggles with their deteriorating mental health and sex/drugs addiction. As such its certainty of interest adds to the growing gay male archive of ‘Chem Sex’ narratives although I’m unsure if Waters himself would like this grouping.

Nevertheless the dance piece which focuses on this wretched, but evidently very satisfying decent into drugs, anonymous sex and eventual coma. Rather softly focused I felt considering the long, long list of ‘trigger warnings’ on the sheet next to the programme at the box office, which triggered my eye rolling, but then I’m a hard-hearted critic who can often be found laughing at Hamlet in his spare time.

Rockbottom is certainly a moving and honest depiction of a certain type of gay male experience and one I could readily identify as part of my own experiences with, as did most of the men in the room who I talked with. It’s a dreamy re-imagining of every club night, of every younger and not so younger gay man’s search for connection, for something other than the void of the single self. The dark humour of the clown is used here at its best, crepuscular pathos eclipsed by careless tragedy, interspersed with frantic bursts of UltraCharm you have to laugh or what…. cry?

This was pink sequinned Butoh, the dance explores the struggle to protect the self from the tragedy of crushing unreachable queer expectations of sex, bodies and ‘living the life’, but never in a tangible way.

I’d given Waters the benefit of the doubt as he’s technically such a sophisticated dancer I was happy to fill in the blanks. It’s the Dancer and the Dance wrought on stage in real moves and reminded me strongly of some of the disco passages from the ground-breaking gay novel by Andrew Holleran, and like the narrative of that bleak but fabulous book the dance here writes its own narrative on stage, the dancer dancing his life out, and us as witness, or perhaps as enablers, watch also under the strobing flashing urgent lights which only stop their siren lure when the dancers heart stops.

It’s a curious piece, and the second half contained a lot more to contextualise Rockbottom, which was not immediately apparent from the piece itself.

Waters’ admirable focus on safeguarding the emotional integrities of dancers and of their mental health and recognising the furious pressures felt by people in creative spaces was explored in-depth with contributions from other artists and support service MindOut.

As a dance piece Rockbottom is convincing, urgent, deeply reflective but perhaps flawed in its fundamental attraction, still, to the glamour of dissolution, the hard crystal glitter of despair and offered no answers about how we got there. Just how we might get out of the rut – before it deepens into a grave.

Perhaps this passive act of choreographed contemplation becomes the interactive process of transformation, clearly showing that these narratives of pleasure are also, simultaneously, stories of suffering and distress. This dissonance can pose challenges to chemsex’s use as a muse (and also to the men captured by its destructive charm) but then I’d not gone along for answers, I’d gone along to be entertained and Waters certainly succeeded in doing that, in an energetic and darkly thrilling way.

The Marlborough Theatre should once again be congratulated on their continued search for new works to challenge and thrill the cities Queer arts goers.