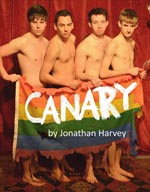 Set in 1960s Liverpool, Tom and Billy hide their love in the closet, then go their separate ways. As pits close and the dole queues grow, Mickey and Russell escape to Heaven in 1980s London. But today the paparazzi turn judge and jury over a love story that could tear this family apart.

Directed by Steven Adams, the play tells the story of recent gay history from illegal sexual encounters in the 1960s via the Gay Liberation Front movement of the 1970s, AIDS in the 1980s, to closeted public figures and homophobic attacks.

Explaining why he has brought Canary to Brighton, director Stephen Adams says:

“Gay people have it easy now, we have civil partnerships, an equal age of consent and civil liberties. So why put on a gay play? This was the question I was asked, and I asked myself, when I put forward to direct this play.

Three years ago I directed Beautiful Thing, Jonathan Harvey’s tale of young love and coming out, and at the time some people thought that it was now a period piece and that there were no longer any issues with being gay and coming out. But I think that gay people still have a way to go until we achieve full equality and have the same respect in society that straight people take for granted.

Living in Brighton we become immune to the problems that people face outside our little enlightened bohemia. In many parts of the world gay people are still criminalised, imprisoned, persecuted and even executed just because of their sexuality. Even with the Arab Spring gay rights are not being adopted in these newly “liberated” countries.

In Russia and the former Eastern Block countries of Europe gay rights are being suppressed and gay pride protests are declared illegal and cracked down on by the police. Even here and in Western Europe and America we face the struggle for gay marriage to be legalised and our relationships to be seen on an equal par with straight ones.

Gay people still find it hard to be themselves without fear of violence and ridicule within their communities in parts of the UK. Homophobic attacks, including murders, have been on the increase in recent years and the bullying of students considered to be gay has resulted in suicides in both the UK and the US. Just earlier this year two friends of mine were beaten up late at night in safe and accepting Brighton, just for holding hands in the street.
It continues to be hard to come out to your families and friends and always will do whilst there is shame and stigma attached to being gay. So yes, we have come a long way but we also have some way to go. That’s why I thought it was important to stage Canary.

It is important to remind ourselves of the past and reflect on the achievements that have been made whilst acknowledging the issues we still face. This will be the amateur premiere of the play and I think that if no other amateur group felt able to put it on, then one in Brighton definitely should!

But Canary is far from a dry issues play, Jonathan Harvey has written a great character-led piece that veers between high drama and camp comedy. As well as a tragic tale of lives led in secret, gay conversions therapies and the high toll that AIDS inflicted.

It’s a deeply moving, funny, uplifting and magical play. Do not go gently. Do not keep silent. Because one day we’ll all be tulips”.