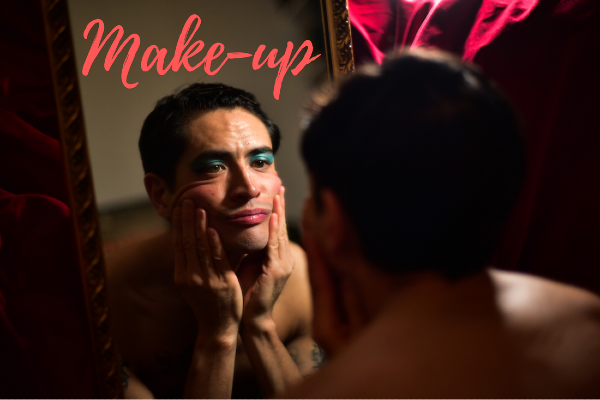 Taking off his make-up , he talks to us but more in the mirror to his estranged father. What follows is a coruscating 50 minutes, where Chris vents his anger on the parent who never accepted him as Queer, but who ironically thereby spurred him onto a  life on the drag scene.

Moj Taylor creates a highly interesting if not thoroughly  likeable performer , who seems to cover a not entirely successful career with bitterness and gall. What writer/director Andy Moseley does create is a totally believeable character , who has a lot to say about Queer identity, personality, individualism and the freedom to be who you are .

It’s revealed  that Chris had secret meetings with his more sympathetic mother and even attended her funeral under his father’s nose dressed as Lady C. He shows pity not hatred for his father and the make-up of the title is a camouflage to hide what life’s done to him. As he puts it “ I’m a  clown in reverse – putting on the make-up to become myself”.

The play has an intimacy that works well in the space at the Rialto Theatre.