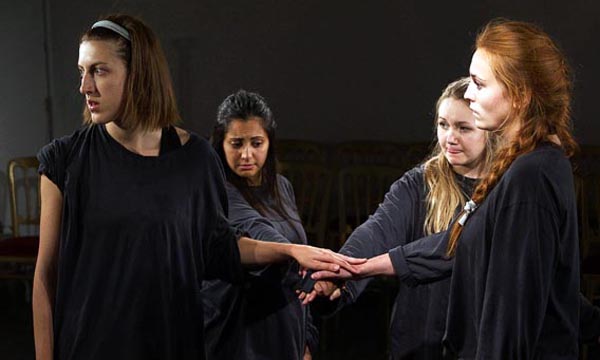 After an acclaimed run at Greenwich Theatre, CultureClash Theatre’s dark dystopian drama UNDER MY THUMB is set to transfer to the Brighton Fringe in May.

Co-produced by Greenwich Theatre and directed by the venue’s artistic director James Haddrell, UNDER MY THUMB tells an uncompromising tale of five women imprisoned for alleged crimes against society. Brought together by a common enemy and facing indefinite incarceration, their one remaining dignity is their continuing belief in their own innocence. The arrival of yet another prisoner seems no surprise, just another woman brought down by the world outside, but is she all that she seems?

Shortlisted for the inaugural RED Women’s Theatre Award in 2016, Cassiah Joski-Jethi’s play appears at The Warren before transferring first to the Incoming Festival in London and then to Assembly Roxy at the Edinburgh Festival Fringe.

CultureClash Theatre was established in 2015 by Serin Ibrahim and Cassandra Hercules, born out of a desire to explore contemporary socio-political issues in Britain, and to tell the stories of individuals most disadvantaged or overlooked in today’s society.

The company’s debut production, a revival of John Retallack’s refugee drama Hannah & Hanna, brought the company into the spotlight for their exploration of the changing face of British racism, their ethnic reversal of the main white character and their exploration of non-white participation in the National Front. The production won the 2015 Mark Ralston Enterprise Award and went on to play in both London and Edinburgh.

UNDER MY THUMB, their second show, has been supported by Arts Council England and Female Arts and sees the company working on a bold new script with a company of six exceptional young female actors. Alongside Ibrahim and Hercules, the cast features Jessica Aquilina, Alice De-Warrenne, Charlotte Green and Ketorah Williams.

Event: CultureClash Theatre and Greenwich Theatre present UNDER MY THUMB