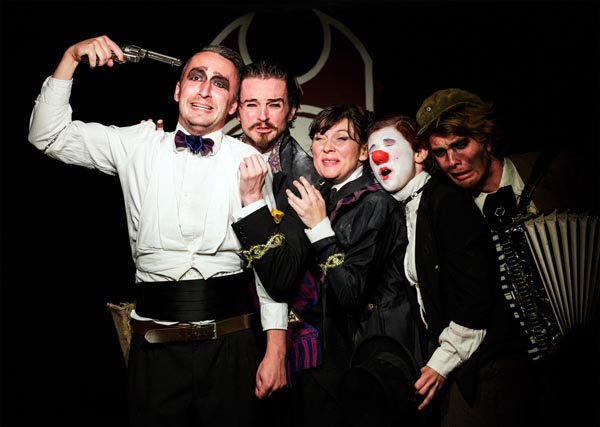 The story of The Liar, a broken down, two-bit mentalist act who has reached the end of his tether and threatens to finish it all. His company of glamorous and not-so-glamorous assistants distract him from his imminent demise and convince him to tell the story of his infamous origins.

“Brilliantly bizarre, fiendish and very funny this is one magical nightmare that you’ll never want to wake up from. Pure brilliance.”….. Edinburgh Guide

The Greatest Liar in all the World comes to Brighton Fringe following two successful 5* runs at the Edinburgh Fringe Festival and a short UK tour in 2015 and has been enjoyed by audiences aged 8 to 98.

In 2017 they became supported artists at Greenwich Theatre, were part of the Wales in Edinburgh showcase, 2016 and won the Wales Millennium Centre Blysh Commission, 2014.

♦ “What it would be like to stroll through the inside of Tim Burton’s and Terry Gilliam’s minds” (SuchSmallPortions.com)

Event: Familia De La Noche present THE GREATEST LIAR IN ALL THE WORLD