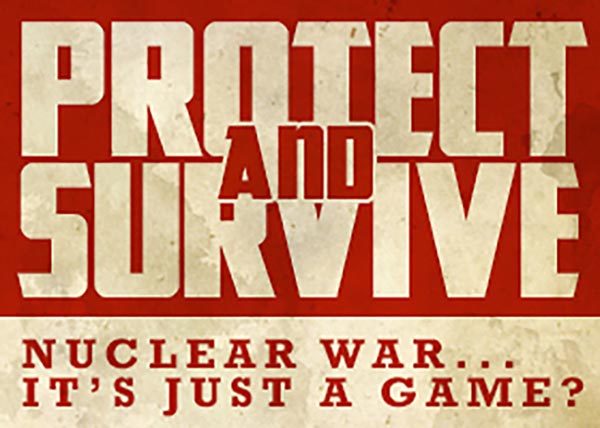 1984. The doomsday clock stands at 23:57. Five strangers take part in exercise ‘HOT SEAT’, a role-play simulation for a pre-and post-nuclear attack on the UK. Nuclear war…. it’s just a game?

On Thursday, January 26, 2017, the group of scientists who orchestrate the Doomsday Clock, a symbolic instrument informing the public when the earth is facing imminent disaster, moved its minute hand from three to two and a half minutes before the final hour.

It is the closest the clock has been to midnight since 1953, the year after the United States and the Soviet Union conducted competing tests of the hydrogen bomb.

Protect and Survive is a world premiere play inspired by the BBC Film Threads, the story of a pre-and post nuclear strike on Sheffield, transmitted in 1984 at the height of the Cold War. In a letter after its transmission, Neil Kinnock, Leader of the Opposition, wrote, “The story must be told time and time again until the idea of using nuclear weapons is pushed into past history”.

The story of Protect and Survive is set in both 2017 and 1984. Five actors arrive at a studio to record the audio drama/documentary Exercise HOT SEAT, based upon authentic Civil Defence course material.

Local council officers are put through simulated scenarios of a nuclear strike and its aftermath, training them to deal with civil defence problems as part of the government’s strategy following a nuclear attack.

As the play progresses, we see the emotional impact on the actors as they act out the fictional story and come to understand the factual horrors of a nuclear Armageddon. In the play/game they are faced with the horrific realities of nuclear weapons on the personal, human level.

However, in the real world, the horror of a nuclear attack takes a step closer. The Bulletin of Atomic Scientists moved the Doomsday Clock, a symbol of global threat, 30 seconds closer to midnight. Stating that the reckless and cavalier language used during and after the US Elections, Russian military annexation and North Korean missile tests all pose the most extraordinary and dangerous threats to the continued existence of humanity. Fiction has become a personal reality.

Established by award-winning producer Simon Moorhead, TBC Audio is a Brighton based production company formed to create and distribute original, full-cast audio theatre outside of London.

Simon says: “We use live performance and audio drama to tell breathtaking, epic and powerful stories. For us, storytelling is one of the most powerful techniques we have as humans to communicate, motivate and to make a difference.”