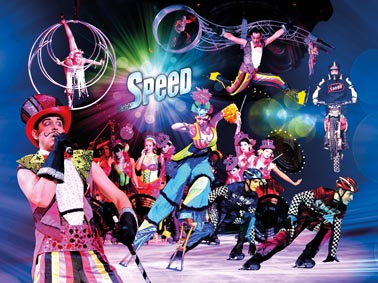 The show at times reaches stunning heights of entertainment combining the best in hi tech visuals with a stunning set, breathtaking acrobats, chorus dancing girls with no skates and some of the fastest skaters in the business. The sound in this production is particularly worthy of mention as the Brighton Centre is notoriously difficult to engineer.

My only criticism is that the opening number of the show makes such an impact that the following two numbers are overshadowed by it and the show’s tempo does not recover till the fourth number, Speed of Nature.

The opening number, Speed of Instinct is tribal and modern, the costumes revealing and the use of fire impressive. It is one of the most powerful and striking numbers I have seen while reviewing any Holiday on Ice production in the last 15 years. I loved it.

The second and third numbers Speed of the City and Speed of Love have a laid back jazz track and sit slightly uncomfortably following on from the brilliance of the opening sequence. The costumes of these two numbers are paricularly smart and tailored and the solo skating in Speed of Love is lyrical and lovely to watch.

Speed of Nature helps bring the tempo of the show back up to speed and features a clever sequence with an acrobat flying high in the air on a surf board on wires, the ocean in the background on the big screens adds to the Hawaian feel of the number. Speed of Money closes the first half with the music back to its pulsating best.

Every number in the second half is strong. Speed of Thrill features the Electro Show with Lorelei the snake charmer, Mike the muscle man and Mauro the Magnificent and features Alyssa and David Gray performing on the Wheel of Death high above the audience.

Speed of Time is dark and moody and features two different versions of ‘the wheel’. Speed of Machines brings stunt motorbikes onto the ice and the smell of the burning exhaust only adds to the excitement of it all. Lightspeed features a race between the two fastest skaters in the company. Every performance brings a different winner to the race but no matter who wins the audience is whipped up and vocal, ready for the finale which features the complete company and soloists dressed as stylish, sexy, galactic storm troopers with costumes that light up for the traditional Holiday on Ice finale with fireworks.

The skating leads are all very strong. Special mention is reserved for Rohene Ward the charismatic former Puerto Rican National Champion who is at times quite hypnotic on the ice and the Russian pairs couple Daria Perminova and Evgenii Belyanin who are no strangers to Holiday on Ice Shows in Brighton. They skate beautifully. His lifts are mighty impressive as are his muscles and for a male Russian skater he is a great dancer and very expressive.

The set for this production is imaginative with two massive circular video screens either side of the ice rink that look like massive turbo generators on a space ship. They come to life when the videos start creating the narrative that navigates you through the show.

Speed is at the Brighton Centre from November 22-25