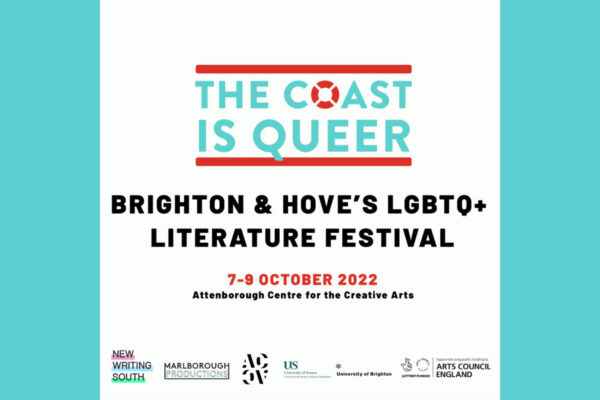 Following an online edition of the festival in 2021 attracting viewers from all over the world, The Coast Is Queer producers, New Writing South and Marlborough Productions, are thrilled that this flagship UK festival of LGBTQ+ writing has a new home at Brighton’s Attenborough Centre for the Creative Arts.

The line-up for 2022 includes InWords Literary Award-winning author Sarah Winman, whose most recent book Still Life (Fourth Estate) was described as “transcendent, utterly humane” in one of many glowing reviews, and Michael Cashman whose extraordinary life making queer history and changing queer futures is described with searing honesty in his 2020 memoir, One of Them.

Also on board are Huw Lemmey and Ben Miller, authors of Bad Gays: A Homosexual History (Verso), based on the hugely popular podcast series, Bad Gays; celebrated speculative fiction writer Leone Ross, whose most recent novel is This One Sky Day (Faber); and Pushcart Prize-winning author Julia Armfield, whose recent novel is Our Wives Under The Sea (Picador).

Novelist, screenwriter and Sunday Times number 1 bestseller Juno Dawson returns with another edition of her Lovely Trans Literary Salon this time featuring Travis Alabanza, recognised as “one of the world’s brightest young stars” in Forbes‘ 30 under 30 list. Travis’s debut memoir None of the Above (Canongate) gives us reason to question the very framework in which we live and the ways we treat each other.

Continuing a strong tradition of introducing new voices, The Coast is Queer will welcome first-time novelists Tice Cin, author of the thriller Keeping The House, a canny, intriguing take on the North London heroin trade; Shola von Reinhold, whose breakout debut, LOTE, is a decadent queer interrogation of the removal and obscurement of Black historical figures; Jon Ransom, whose distinctive prose won wide praise in his debut novel The Whale Tattoo; and the author of Lessons in Love and Other Crimes, Elizabeth Chakrabarty, a novel inspired by Elizabeth’s own experiences of hate crime, which has been described as “heart-breaking, hopeful and compulsively readable”.

Manchester-based rising star Okechukwu Nzelu, whose second novel is Here Again Now (Dialogue Books), will join rule-breaking novelist, playwright and theatre maker since 1983, Neil Bartlett, in an inspiring intergenerational conversation. Neil’s first full-length fiction since 2014, Address Book, was picked by Jackie Kay as one of The Guardian’s Books of the Year for 2021.

Local writers appearing include Beatrice Hitchman, whose atmospheric story of two Austrian women making a life together in the early 20th century, All Of You Every Single One, is long-listed for the Polari Prize, and Helen Trevorrow, author of New Brighton, which is described as “where The Handmaid’s Tale meets Bladerunner”.  Brighton’s award-winning poet John McCullough returns to The Coast is Queer following the publication of Panic Response where personal and cultural anxiety are put under the microscope, and Maria Jastrzębska makes a welcome return with her latest collection Small Odysseys, which will be launched by Waterloo Press at the festival.

The festival’s poetry roster also includes Costa Book Award for Poetry winner and editor of 100 Queer Poems, Mary Jean Chan, in the company of Fran Lock, author of eight collections and associate editor at Culture Matters; neo-modernist poet Verity Spott, whose work has been translated into five languages; and queer Glaswegian poet Peter Scalpello – all contributors to this anthology.

Adam Nathanial Furman and Joshua Mardell will be joined by creators of two of the global spaces featured in their unique LGBTQ+ atlas, Queer Spaces –  trailblazing turntablist DJ Ritu, founder of the iconic Club Kali, and Helen Dixon, co-founder of Centro Cultural Guanuca in Nicaragua.  They will be in conversation with writer, performer and historian Clare Summerskill whose book of British oral histories Gateway To Heaven also illustrates the ingenuity and courage of queer people creating safe places to nurture, sustain and educate.

Elias Jahshan, editor of This Arab is Queer and Golnoosh Nour and co-editor of Queer Life, Queer Love will discuss the varied experiences of the queer diasporic community and the interweaving of the personal and political in their respective anthologies with activist, writer and speaker Maryam Din.

Other guests at The Coast Is Queer include writer Finnish-Albanian Pajtim Statovci, author of the novel Bolla; declan wiffen, who will host one of his well-loved Cruising Nature events; and celebrated performance artists Ursula Martinez and Stacy Makishi who will be joined by choreographer and Ledbury Poetry critic, Oluwaseun Olayiwola, to discuss writing for performance.

Queers in the Library is back at The Coast is Queer for the second year bringing The Bookseller’s Rising Star Zoey Dixon, filmmaker, writer and co-founder of rukus! black LGBTQ+ archive Topher Campbell, and Digital Resources Librarian at Chatham House Binni Brynholf together to explore what we can learn from libraries as sites of LGBTQ+ and other struggles.

A programme of short queer films curated by the BFI – including The Cost of Living by Alice Trueman, Bingo Queensby Nick Finegan, Daylight Rules by Alex Browning, Nails and Beauty by Rhona Foster and Octopus by Ella Glendining – will be screened throughout the weekend alongside a selection of films produced by Brighton-based filmmakers, My Genderation.

Lesley Wood, CEO of New Writing South, said: “We’re looking forward to welcoming both familiar and new faces to The Coast is Queer, back in joyful real-life in 2022 and, once again, showcasing some of our boldest, brightest and best LGBTQ+ writing talent.

“The festival has become an exuberant part of the UK’s literary landscape and this year feels even more special as we gather in person for three days of powerful, transformative interviews, discussions, readings, films and workshops”

It will be possible to buy and browse at the festival’s bookshelf, both in-person and online, curated by Brighton & Hove’s independent bookshop: Feminist Bookshop.

For more info on The Coast is Queer, CLICK HERE