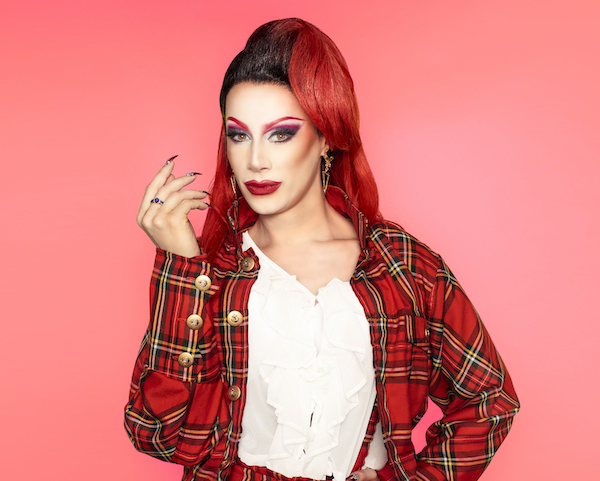 Owen Farrow aka Divina de Campo was spotted by their headteacher when they sang much louder than anyone else at school assembly. “I got lots of solos. There was always lots of music in our house – my mother and brothers played the piano – I’m one of seven – a huge family – so I had to work out how to be noticed”. It didn’t take long.

Mistaken for a girl because of their long hair at auditions for Oliver! the musical, Owen was pipped to the post by a boy who had bleached his hair to gain attention. I’m guessing that was a salutary showbiz lesson learned there and then in Brighouse, Yorkshire.

Fast forward and Owen takes dance and drama at Manchester Metropolitan University on one of its small satellite campuses. “I’d gone there to get my dancing and acting better – I thought my singing was ok”, says the performer who has a four-octave range!

They came to drag in a roundabout way: “I was doing gender-fluid performances at uni and I’d seen some drag queens perform and I was quite snobby about it”. Owen was now a dance development officer and their husband suggested doing a drag act. ”I was terrible to start with. My make-up was terrible for a lot longer”. A spell in Ibiza honed their act, and the realisation that without the imaginary fourth wall there was real interaction with the audience. ”But it took a long time to get my brain into the right place”, they added.

Talking about their time on RuPaul’s Drag Race UK, Divina as we will now call them is clear: “It’s very open. Anyone can win. It was a long process to get on the show, and in the end you don’t have long to put something together. I knew I was a control freak, but the show reinforced it. I don’t actually like competitions, but it was a massive opportunity and huge platform. The stuff I’m doing now I wouldn’t have done except for Drag Race. And yes some of the bitchiness is fabricated – playing to the camera – and some of it is real.

”Some people try to get in your head and make you feel like shit: you have to be ready for it”. But on the positive side Divina’s next role was the falsetto drag Mary Sunshine in the hit musical Chicago. “I got it directly because of RuPaul.

”I had the best time with amazing performers Sinitta and Darren Day”. And of course their four-octave range came in handy: “It’s not something I really talk about. I think I was singing falsetto all the time and when my voice broke, I just kept all of it and got an extra octave underneath.”

At the time of our interview Divina was coming to the end of a run as the lead in the queer rock musical Hedwig And The Angry Inch at Leeds Playhouse before reprising it in Manchester at Home. The critics have raved about it. “The director Jamie Fletcher was in the year below me at uni and we’ve worked together over the years. After 10 years we’ve become an overnight success!”

Divina was due to play Audrey 2 in Leeds’ production of Little Shop Of Horrors, but the production couldn’t go ahead because the rights were withdrawn. So the first fully staged version of Hedwig for 20 years was put in its place. Divina says it’s still globally relevant with its gender-fluid message. “The song The Origin of Love is a revelation. It’s a gay origin story. It was a real eye-opener moment for me. Hedwig is really messed up – there’s lots of trauma she’s been through (including a sex change operation) – and some of this stuff I’d been through. I don’t have a particularly strong attachment to my physical body, so I wondered if I’d had a sex change op would I then suffer from dysphoria – and I answered that no I wouldn’t. Hedwig has a more feminine side but what her body looks like is not as much an issue – and I agree with that.

“Yesterday I realised that on RuPaul you’re watching me have a mental breakdown – and so is Hedwig – she’s having a breakdown onstage. So I’ve done that on TV and now every night I recreate it on stage. The show has had a tremendous reaction, but you can never bank on it. Once I’m in front of an audience I feel what’s right and what’s wrong. In this show there was nothing drastic to change.

”I’d love for it to transfer to the West End, but it’s the rights and the logistics – we’ll record a couple of songs maybe, so there’s some sort of record of it. I think it could do three to six months in a London venue and then six to nine months on tour. It needs a 500-seat venue. You’ve got to think Hedwig could jump out and eat you in the audience, so the audience needs to be close.”

Asked for their coming-out story, Divina told me: “I told all my friends at school and they all went: yes and? We all know you’re gay. All my brothers and sisters support me. My mother was worried for me but she’s wonderful now”.

And finally any advice to a young Owen? “Trust in the path. Keep doing. Enjoy it as much as you can but do not take it so seriously.”

You can find out Divina’s future shows HERE