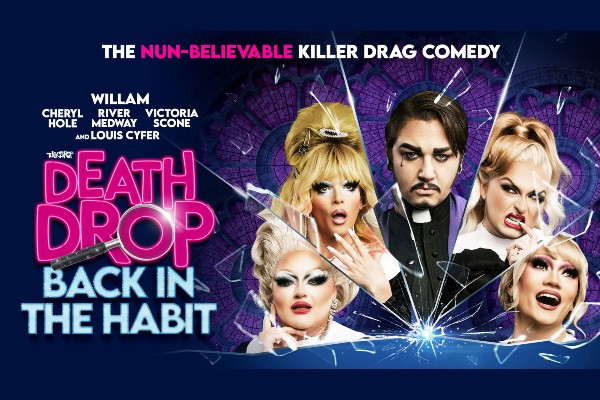 It couldn’t have been worse weather for stage stars in full make-up and drag. But braving torrential rain and gales, some of RuPaul’s finest graduates met me in the new chic cocktails and coffee venue 2 Church Street ahead of their residence at Brighton’s Theatre Royal next week.

Death Drop was a mega hit when it had 3 stints n London’s West End and then on a UK tour. Now its sequel, Back In The Habit is a farcical, murder mystery Drag show musical set in a convent – a kind of mash-up of Sister Act, the Mousetrap and Drag Race.

It features legendary Drag Queens and stars of RuPaul’s Drag Race Willam and Cheryl Hole, and the cast is led by Drag King LoUis CYfer. I spoke to all three ahead of their Brighton gigs.

Willam has been outspoken about their time on Drag Race. “ I worked before Drag Race and after it – I’m not beholden to some set of rules. It was a platform for me. They kicked me off in the end. The attraction of Death Drop is it’s like being a 5-year-old again. It’s a smile-and-clap-along show. It’s no Nunsense, you might say”.

LoUis was the first Drag King to win the prestigious Drag Idol contest and they have gone from non-binary strength to strength ever since with a unique act that I would describe as burlesque with balls. They told me: “ I play Father Alfa Romeo. He is a priest with a secret who is tasked with travelling to the convent of St Babs to investigate reports of strange goings on and to find a priceless ring. When he arrives he finds he’s bitten off more than he can chew and very quickly is submerged in a chaotic horror that haunted houses at your local leisure centre only dream of”.

“I love the Death Drop franchise and with a franchise you need a returning character. Tuckshop and Trafalgar decided to go in the direction of making the lead a Drag King and there was no way I was going to miss this opportunity”.

Death Drop – Back In The Habit is at Brighton Theatre Royal 13 – 24 December . look out for my review in Scene. Booking info at atgtickets.com

You can check out the full cast and creative team and other details at the Deathdrop Website here: