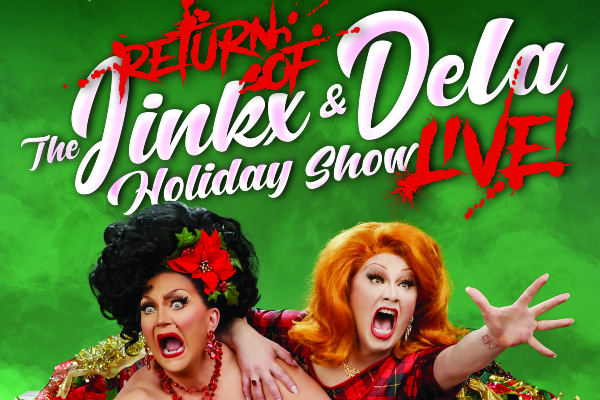 When you think of Eric, you think of Ernie; when you recall Fred, you recall Ginger too. So it is with Ben DeLaCreme and Jinkx Monsoon – they are inseparable Drag comedy partners, who both shone on RuPaul’s Drag Race. Their one-night stand in Brighton was a return visit to our city, and the whooping, shouting, clapping audience were clearly keen to welcome them back.

Their holiday show has many moments of genuine comic brilliance; their singing voices – particularly Jinkx’s – are stunning, powerful and moving. Their chemistry onstage is absolutely pitch perfect, even when they manage to corpse each other in their fast-moving patter.

The cleverness of their double-act is the difference between their character creations. DeLa is sweetly-spoken, naive, sentimental and revelling in her White Anglo Saxon Protestant ( WASP ) privilege. Jinkx is foul-mouthed, feisty, full of controversial social commentary – she’s anti-Christmas, anti-Santa Claus, anti-Jesus, anti-everything except another martini and oral sex she will clearly have with any man who crosses her path.

Their songs are either original, sarcastic parodies or twists on well-known Christmas tunes and they all work well. The show- running at 2 hours – eventually outstays its welcome, well in my view anyway,  and would truly benefit from an external director who would brutally tell them what works and what doesn’t. The show is directed by DeLa and that’s a serious shortcoming, as they clearly believe their own hype – but I grant that much of that hype is based on real talent.

The many changes into ever-more glamorous and outrageous frocks are covered by video clips of their lockdown bunker where DeLa delivers to Jinkx all the multiple animals and people in the verses of the 12 Days of Christmas – it’s clever, slick and very very funny.

At the end of Act One they part company as a double-act but you just know there will be a 2nd Act reconciliation and it comes in a dollop of American schmaltz and a fabulous Jinkx solo about hope and the light in our lives. But they leave us with their usual humour singing Everyone Is Traumatised By Christmas.

The show was at Brighton’s Theatre Royal as part of a 26-city tour of Europe, the US and Canada. I’m sure they’ll  be back.