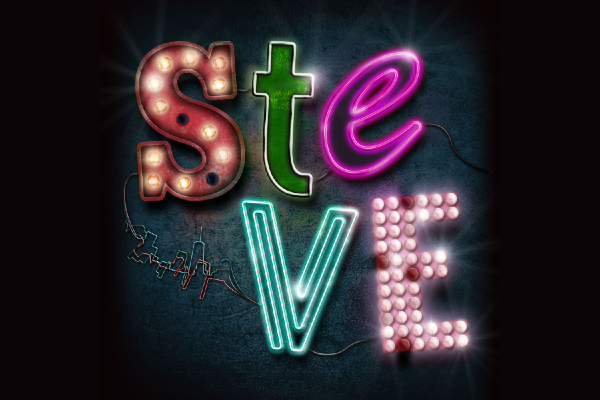 Mark Gerrard’s play Steve is positively dripping with Stephen Sondheim quotes, parodies, lyrics and style, and overlaid with more SS tunes than you can count from the talented MD and pianist Ben Papworth playing dexterously in the corner of the set.

At any moment you expect a spirited chorus or solo or two but this is a strictly speaking-only show. I can imagine the late great genius composer/lyricist loving it and laughing his head off at its dark wittiness.

In its 90 minutes the play explores love, loss, infidelity, polygamy, lies, secrets and death. Quite a sweeping canvas. The Playhouse space has some of the audience in rows, and some at cabaret tables, and there’s a bar in the corner. We open sitting in the theatre-goers’ palace – New York’s Joe Allen’s restaurant, at ex-chorus boy Steven’s birthday.

Confusingly his partner is Stephen, and they have an unseen 8-year-old son Stevie. Oh and there’s an offstage gym trainer Steve, and the ubiquitous Argentinian waiter is called Esteban ( translated from the Spanish as Stephen). You can see where some of the humour comes from, by now I guess.

The multitude of Steves is of course completed by the musical accompaniment under the dialogue – many of Stephen Sondheim’s greatest tunes. And indeed the show is dedicated to the Broadway genius who died at the end of 2021.

It’s a play for our time, with its sexting, polyamorous domestic set-up, and the looming spectre of death for the play’s only female character Carrie, played by the marvellously comic Jenna Russell. The burden of the comedy and energy falls on chorus boy Steve, played at a furious and hilarious speed by Holby City star David Ames.The timing of the quick-fire repartee between Ames and Russell is a roller-coaster of joy and pain.

Ames is pitch perfect with his sardonic, sarcastic, bitchiness as his relationship and then his life fall apart before his eyes.

It’s a morality tale about keeping hold of the precious things in life and settling for what you can get. It’s no surprise that as the play ends – no spoiler – Ben plays the strident joyful chords of Sondheim’s Move On.

Thanks to a little furniture, clever videography and the smallest stage turntable I’ve ever seen, the action moves rapidly and fluidly from location to location and director Andrew Keates keeps the pace moving between frenzy and relaxed contemplation with great skill.

If there’s a weakness in the piece it’s that the remaining characters are sometimes a little too sketchily drawn, and I longed to see trainer Steve, who makes up a love triangle offstage. But in the end it’s the chemistry between Ames and Russell’s characters that we cling to – as SS said “ Hey Old Friend.. here’s to us, who’s like us? Damn few”.

Steve is at the newly-opened Seven Dials Playhouse, London until 19 March.  Tickets sevendialsplayhouse.co.uk