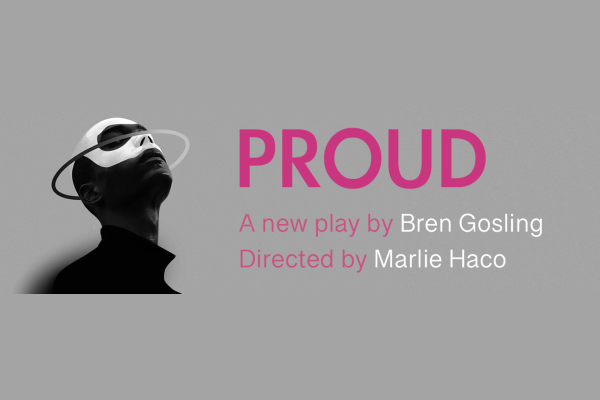 Amir could have been a top-flight basketball player in his native war-torn Syria. Now as a 21-year-old refugee he sweeps the streets of Walthamstow. Roland, nudging towards 40, has left his family home, his 15-year-old son and his wife from whom he’s separated and upped sticks without explanation from Brixton to Walmathstow too. His unruly but musically gifted son Gary is in trouble at school but won’t say why. When Roland, practising his baskets on the local court, meets Amir it sparks something in the two men.

Bren Gosling writes a terse drama of this triangle, with its storylines of lies, secrets, prejudice, fear and the burgeoning of Gay love in a gripping, emotional but always honest way that compels our attention.

Taofique Folarin as Roland makes great use of his non-acting other day job as a fitness and well-being instructor to give  a sinuous, ripped show of his bodily dexterity. He is always mesmerising to watch.  He pitches the character just right as a confident man who has secrets to keep and love to find. Andrei Maniata as Amir creates a nuanced and complex character – at once shy, stubborn and disturbed but with a child-like smile he can turn on when he wants to. His movements are more brusque, sometimes tentative but an equal joy to watch.

Kaine Hatukai gets humour out of the naive but street-wise teenager Gary, who’s no mean ball player too but whose burgeoning talent as a violinist delights in the final moments of the play. Like ballroom dancers on the competition floor, the actors use every inch of the tight acting space – sometimes you come face to face with them – sometimes your face is close to their trakkie bottoms. Their skilful, fast-moving ball-play gets perilously close to those of us on the front row and there’s an extra frisson from that.

In this week of invasion and the prospect of mass movements of refugees, it’s deeply resonant that Amir is finally able to tell his harrowing story of escape from the tyranny of Syria – it is a stunning exposition, full of emotion, bitterness and fear and Andrei delivers it with passion and truthfulness.

Though from different cultures,  Amir and Roland share the fear of being found out as Queer, but as Amir tells us, life “ is about keeping what you’ve got safe”.

I’m not a star-rating regular but Proud is undoubtedly 5-star theatre.

It plays at the King’s Head until 12 March –  tickets at kingsheadtheatre.com