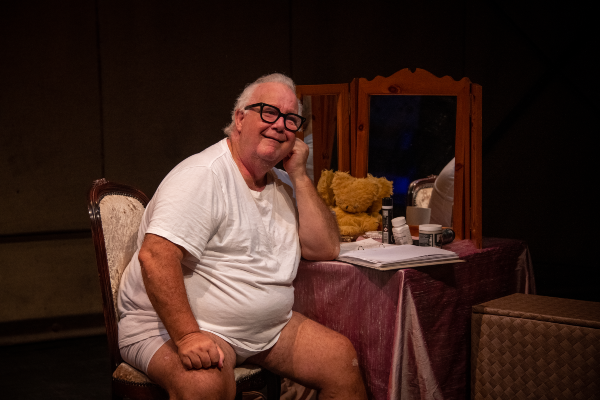 It’s the morning after George’s 60th birthday and David, his 50-something drinking friend is revealing the disturbing events of the night before.

Quick-witted, sharp, dry and deeply perceptive, David, played impeccably by Allan Cardew, flits from a narrative direct to us of the night’s events to reminiscences of Queer life when it was secretive, dangerous and for some deadly. Remembering the Weather Girls  anthem It’s Raining Men he sharply replies: ”well it was for some: for most of us it was a light drizzle”, typical of Andrew Kay’s brilliantly observed dialogue.

What David calls “ our private safe world” is disrupted by the antics of a group of twinks, who mock and imitate the older group who are sitting with David in a Gay bar.

There’s an air of annoyance in David’s tone, mixed with some resentment that these gym bunnies with their tattoos and careless attitude have forgotten how hard fought their current freedoms were to achieve. And that’s pretty much the theme of this 45-minute monologue.

But there’s more to it than that- what Kay does is interweave the here and now of being Gay and a certain age, with a history lesson in where we all were in the 1980’s. As David wryly observes: “I’m no spring chicken- it’s many years since I’ve been compared to any kind of poultry. I never did find Mr Right, but plenty of Mr Right Now’s”.

Confronting the “ fit fairies” as he calls the twinks, he says: “When I was your age I wasn’t going to the gym, I was going to funerals”.

But both Kay and Cardew are careful not to make this a deeply bitter, angry diatribe against the young, though it veers that way at times. In the end, and there’s a surprise end, it’s a fond, bitter-sweet elegy to Gay life then and now.

What you also need to know is that, with a few hours to go to the first of two performances at the Theatre Royal, Cardew, who is the show’s director had to step up to the plate and take over the performance due to the indisposition of Jason Sutton.

His nuanced, pitch perfect and endearing characterisation is therefore all the more remarkable. A great piece of  acting.