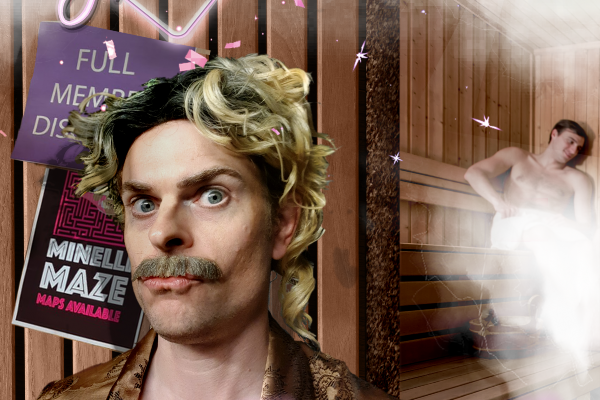 Jack Hoosie is part-owner of a third-rate Gay sauna, the Leisure Groan, in South Yorkshire in the 1990’s.We the audience are putative joiners on a new members’ night and while he folds disgusting-looking towels he regales us with the amenities- the Minelli Maze, the Witney Whirlpool -no more than 3 men permitted at a time – and tonight’s special offer entry for £10 or a fiver with a small towel, provided it’s on your head.

That’s the level of the humour in this strictly politically incorrect 50-minute cascade of one-liners and innuendo.

In his defence I’m sure Gareth would say they are the words and views of a character at a certain time, and I guess we give him the benefit of the doubt. At times it feels like the sad/funny Victoria Wood character of the Channel swimmer and at others like a night at a working men’s club that’s seen better days.

I saw the show as part of Camden Fringe  at the famous Water Rats, but it moves  south of the river later this month. The audience, largely Queer for sure, roared with laughter throughout. Poor old Jack, played with relish by the playwright himself, has aspirations to have a cabaret lounge in the sauna, complete with grand piano but sad to say his climax is as disappointing as that of his punters upstairs.

I think it’s a clever idea and needs further development.The rapid-fire jokes need to be slowed down for maximum impact and strong direction is needed to vary the pace and colour of the piece – sometimes Edward moves for no apparent reason, for instance.

But it’s an accurate glimpse of how things used to be on the margins of the Queer sex industry and a reminder of how far we’ve come.

You can catch the play in the Not The Edinburgh Fringe season at Above The Stag, Vauxhall on 27 and 29 August . Information abovethestag.org.uk