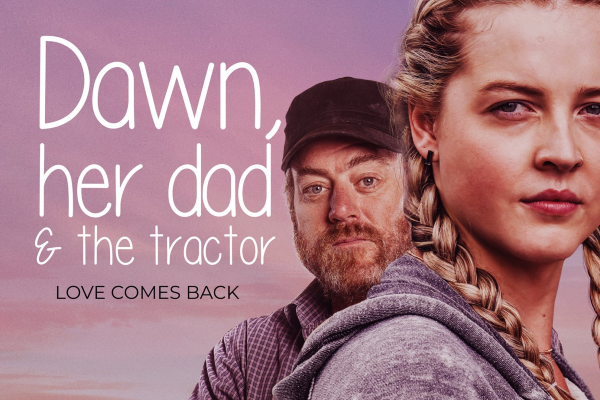 In a close-knit Canadian farming community everyone knows everyone else’s business, it seems. When the much-loved Miranda dies, widower John Andrew ( Robb Wells) seeks solace in his returning adult children. Tammy, with her boyfriend Byron in tow is soon joined by sibling Dawn. But she had left 5 years earlier as Don.

And so begins this beguiling tale of grief, loss, adjustment, prejudice and reconciliation, with Trans actress Maya V. Henry at its emotional core as Dawn. Writer/director Shelley Thompson has created a dramatic arc that leads its characters from fear and ignorance to acknowledgement and self-awareness and that pulls the viewer into this bleak but beautiful landscape.

There are moments when Wells’ rugged but fragile farmer seems to be mourning not only the loss of his rock of a wife, but also the memory of his son. Thompson’s clever twist is to make the transitioned Dawn the spitting image of her mother. The writer is giving the dead matriarch’s seal of approval to the change, and indeed she of all the family was the only one to know Dawn’s secret until Miranda’s death.

Maya Henry’s great skill is to balance her self-confidence and angry defiance with an attractive and sometimes humorous outlook on life as it now is for her. It’s a story of adjustment after death as much as adjustment after transitioning and the film is always loyal to its core messages.

Punches are literally not pulled, and Thompson deals full-on with transphobia, ignorance and violence and doesn’t opt for a cop-out conclusion. The secondary storyline – Dawn’s determination to restore her mother’s much-loved rusty old tractor and compete in a man’s world of tractor trials, sits side by side with her father’s growing acceptance of who his daughter has become – her true self.

And whatever compromises life throws at Dawn, she rightly tells us:” If you think how I live is a lifestyle choice, think again”.

The film is part of the BFI Flare film festival which runs 16-27 March . Details of how to view at bfi.org.uk