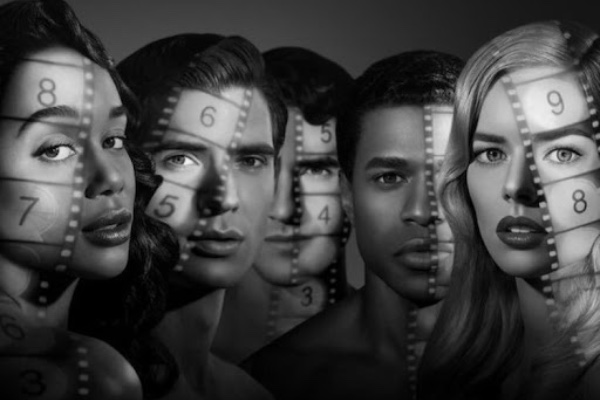 First thing to say is if you’re saving up a binge watch of this 7-part Netflix treat, then don’t read any further. ( spoilers follow!)

I’ll try not to give all its secrets away , but as it’s been widely reviewed, here goes.

Ryan Murphy and Ian Brennan’s version of the movie business of the 1940’s is an intriguing blend of a little fact and a whipped cream pile of fiction. This is Hollywood as we lgbtq and ethnically diverse folk would have wished it to be. It’s wonderfully evocative of the era –  costumes, interiors and the sheer technicolour look of it .

The show is peopled with stunning hunks of men – wannabe actor, writers, directors ; and an equal number of glamorous or slightly dippy would-be divas; and of course there are the villains – a predatory slimy agent and a stupid self-made film studio boss.

The fun – apart from the semi-naked beefcake is the central premise that a black actress could become a star; that a gay black writer could be nominated for an Oscar; that a story about a Hollywood misfit’s suicide could be good box office.

So in Murphy’s  alternative Beverley Hills the actor Rock Hudson is not closeted for years and forced into a cover heterosexual marriage as he was. Here a slightly thick Rock , played with touching naivety by Jake Picking, stays openly gay and resists the vile manipulations of agent Henry Wilson ( a deliciously evil Jim Parsons).

Centre stage for much of the action is the legend that is Patti Lupone, exquisitely coiffured and dressed to kill as the hustler’s client who becomes a studio boss and finds a purpose in life.

Laura Harrier is the would-be black actress  Camille , trying to escape playing maids and walk-ons. She is lithe, attractive and carries an inner conviction that shines throughout.

Dylan McDermott effortlessly slides delightfully  from gas station pimp to benefactor, actor and love interest, and Joe Martello is perhaps the most human and sympathetic character as studio producer Dick Samuels, who realises his true sexuality late in life – but not too late.

So does the film get made; does it make it to the Oscars and does it beat off the competition? If you have’nt watched the series, you’ll have to, but from me it’s definitely Hooray for Hollywood.

Check it out on Netflix now.