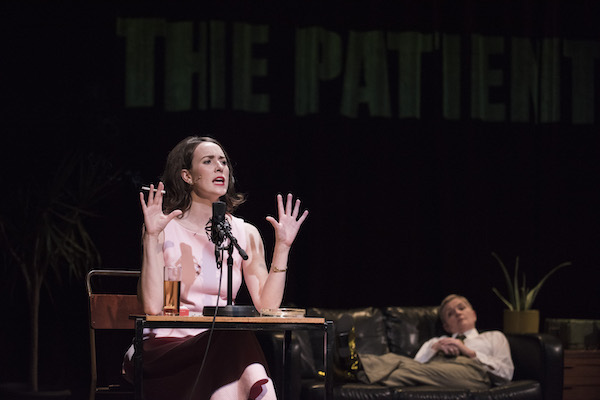 In mid-’60s California, a young woman, Gloria (Liv O’Donoghue), left her husband and discovered the joy and guilt of sex outside of marriage. In order to help future students she saw three eminent psychotherapists for one session, each of which was filmed to be used only within an academic setting. Gloria is betrayed subtly, and not so subtly, by these three men; Gina Moxley’s play focuses on the woman whilst putting the famous men she saw firmly in their place in a work which looks at some of the worst aspects of male pattern misbehaviour.

Moxley herself plays the three men Gloria opens up to. The first is the avuncular Carl Rogers and the last the nakedly antagonistic Fritz Perls. It’s hard to know how much dialogue is lifted from the films but the triptych makes an interesting set of different male stereotypes. Perhaps the films could be seen as an exploration of the male psyche as much as analysis of the one patient. We learn that after the session Perls, on meeting his former patient, invited her to use her hand as an ashtray for his cigarette – it’s a bizarrely unpleasant story which seems to underline one of the play’s hypotheses that it’s the doctors who had the personality defects. And when we learn that Perls later hit a woman and told her “I’ve beaten up more than one bitch in my life” it’s pretty obvious who needed therapy. After all, Gloria just wanted to enjoy herself without feeling shame.

Interspersed with the therapy sessions Moxley remembers what life was like for women in Ireland in the ’70s. It’s a depressing story of girls being constantly exposed to unwanted flashes of male genitalia and older women being subject to contempt and violence. But if the show sounds uncompromisingly heavy it’s all done with humour which can be light as a feather or blackly ironic. Moxley is as charismatic an actor as I’ve seen in a long while – puckish, mischievous with an almost permanent twinkle in her eye. O’Donoghue completely inhabits the role of Gloria, an obviously intelligent, decent woman who has her own Jackie Onassis-style glamour.

Needless to say, the promise to Gloria was not honoured and the films were widely released and today can even be seen on Youtube. But this play is a brilliant tribute to a woman who feared she’d just be a footnote in the history of psychoanalysis. It’s also got a great soundtrack with live renditions of songs by the Beach Boys, L7 and, of course, Van Morrison. Plus it’s probably the only show you’ll see this year which has a flying penis.

The Patient Gloria is at Theatre Royal Brighton as part of Brighton Festival 2022 and runs till Saturday 14 May.