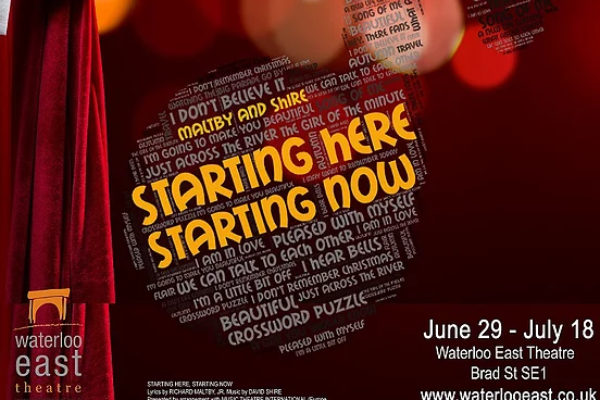 Tucked under the railway bridge at Waterloo East , a studio theatre is staging a golden 75 minutes of sharp lyrics, hummable melodies and the kind of warmth you get from the Mediterranean sun.

Maltby and Shire’s Starting Here, Starting Now is an apt title for the opening show of a theatre that  like many others has struggled to survive the pandemic lockdowns.

This chamber piece, wearing well after more than 40 year since its birth, gets a socially distanced staging with its 3 performers carefully circling each other and the usual band replaced with a solo keyboard player , brilliantly performed by Inga Davis-Rutter . Every song, whether it be of love to come, love lost, bitter love, endless love or unreceived love, is an absolute 100 per cent gold nugget and the trio couldn’t be better at delivering them with power, energy, wit and tunefulness.

There are far too many songs to list but as a flavour of the night, Gina Murray has perfect comic timing in the laconic tale of a clever wordsmith woman and her ex- boyfriend who leaves her to do the Sunday Times crossword alone. Nikki Bentley is a feisty younger woman who ranges from naive optimism to bitter loneliness and shines out as the vacuous Selfridges make-up counter girl as she coos: “ you can be beautiful like me… you may think I’ve always been this chic, but no”, with a stunning cheery  lack of self-awareness.

Noel Sullivan has a clear ringing voice which  he uses to great effect in the simple but emotionally charged I Hear Bells. To be honest there’s not a single weak moment in this show and it ends with a topical and  poignant number There’s A New Life Coming – let’s hope so.

If there was any musical theatre justice in this world this production would run and run and run.