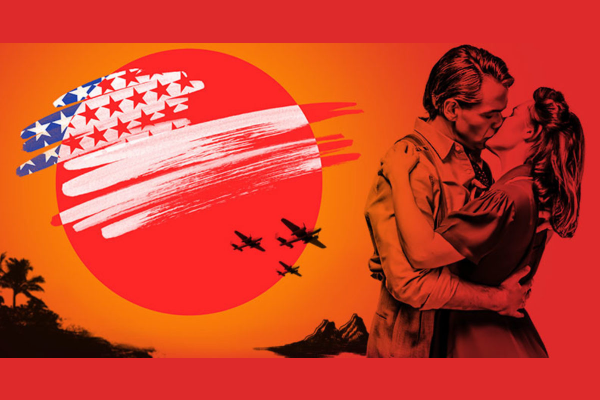 Rodgers and Hammerstein’s South Pacific and I are the same age – and for a 72-year-old it’s in remarkably good condition and full of energy in this production to mark the reopening of the Chichester Festival Theatre .

As the house lights  dimmed there was a spontaneous  and prolonged outburst of applause and cheering – so glad was the audience to be back where they belong .

Daniel Evans’ production is bright, breezy, inventive and thoughtful , dealing as it does with hatred of the Japanese, racial prejudice from its heroine, and mixed race marriage. On an often bare but huge revolve, backed by palm trees projected onto harsh corrugated iron walls, the action moves swiftly with necessary scenery being trucked on by the cast.

Gina Beck is a feisty, energetic  and optimistic Nurse Nellie Forbush – a little girl from Littlerock who struggles to overcome her inbred racial prejudice when she discovers the love of her life-  retired plantation owner Emil – has two children from his now dead Polynesian wife. Nellie’ s attitude of course is all the sharper in focus for today’s audience in the era of Black Lives Matter.

Downtown star Julian Ovenden  as Emil , has a rich, light voice with a power to soar to the higher limits of the vocal range especially in Some Enchanted Evening . His rendition of This Nearly Was Mine is tender, thoughtful yet with a tinge of anger.

And this show is always good to look at – the simple addition of bowls of flaming lights on the edge of the revolve evokes the mystery and magic of the paradise island of Bali Hai . Rob Houchen as Lieut Cable , sent to spy on the Japanese , is initially a sharp, uptight figure but he bursts into bloom in a balletic dance with his newly-found Polynesian love Liat, played , tenderly , silently and almost entirely in movement by Sera Maehara. Cable’s counterblast  to the idea that prejudice  is born in us -You’ve Got To Be Carefully Taught – is a stunning, thought-provoking moment, and Houchen brings it off brilliantly .

Evans develops the often purely comical minor characters – the wheeler dealer Seabee Luther Billis ( Kier Charles ) has a poignant pathos in his search for love , and the grotesque Polynesian saleswoman Bloody Mary ( Joanna Ampil )- touting  everything from grass skirts to shrunken heads , carefully removes her face paint on Bali Hai and shows an inner serenity when she orchestrates the young lovers’  encounter.

The show has high-octane energy – from sailors quick marching round the revolve, to the nurses energetically having a towel fight in the cleverly staged I’m Gonna Wash That Man Right Out Of My Hair.

This is a 5-star enchanted evening and as a comeback show it sets the bar very high .

South Pacific is at Chichester until 5 September . It’s also being streamed worldwide on 8 separate dates.

To book or more details at cft.org