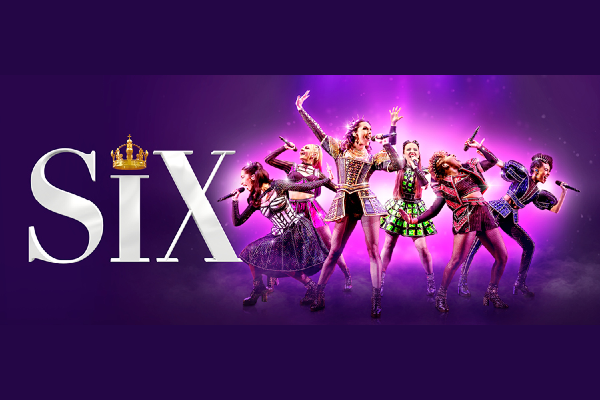 SIX is an international phenomenon – and it’s got 2 things to celebrate right now. First it announced its original studio album will come out shortly on vinyl. The songs from SIX have had 450 million streams and 3 billion views on Tik Tok. And now its residence has begun at its new “ forever home” at London’s Vaudeville Theatre.

Toby Marlow and Lucy Moss’s rock concert format works brilliantly as the dead wives of Henry VIII take over the stage and the history books to right wrongs and exert massive female legitimacy to this 500 year-old saga. I first saw it in 2018 when it was at the compact Arts Theatre. Since then the show and its audience have grown and grown.

In its new home it has a much more rounded musical sound, fantastic lighting effects and Girl Power costumes to match.  It’s a wonderfully uplifting 75 minutes of dominance by the Queens telling their side of the story without any help from men – the band is all-female too.

It carries you along on its wave of enthusiasm, energy, feistiness, rebellion and humour. As they sing in their opening dynamite number “ This is a story that you think you’ve heard before”, but not like this. Jarneia Richard-Noel kicks off as Catherine of Aragon with a strong-willed No Way, followed by Bryony Duncan as Anne Boleyn in the clever “ Don’t Lose Ur Head”, which ofcourse she did. Her song about three in a bed is brilliantly caustic : “ don’t be bitter ‘cos I’m fitter”, she tells Henry’s first wife.

Stand-out song of the show for me is Natalie Paris‘ slow lamenting ballad as Jane Seymour in Heart Of Stone, and its play on words : her heart is stony, resilient, but she’s not stony-hearted. Keeping us firmly in the today of fake news and cat fishing, the story for Cherelle Jay as Anna of Cleves is about Hans Holbein’s misleading portrait of her which charmed Henry till he met her face to face.

Zara McIntosh as Katherine of Howard, delights in her promiscuity and had the best Spice Girls sound-alike song in All You Wanna Do. Danielle Steers as the one survivor – Catherine Parr – has a haunting song, in which she recites a letter to the love of her life Tom, who has had to stand aide for the King. It’s beautiful, bluesy and thoughtful.

The show goes out with a bang with an ensemble blockbuster reiterating their independence – and who would dare say no? The band, led by Lauren Hopkinson, adds greatly to the power of the evening. Long may the Queens of the West End reign in this 5-star entertainment.

SIX is at the Vaudeville Theatre with a separate cast on tour – tickets at sixthemusical.com