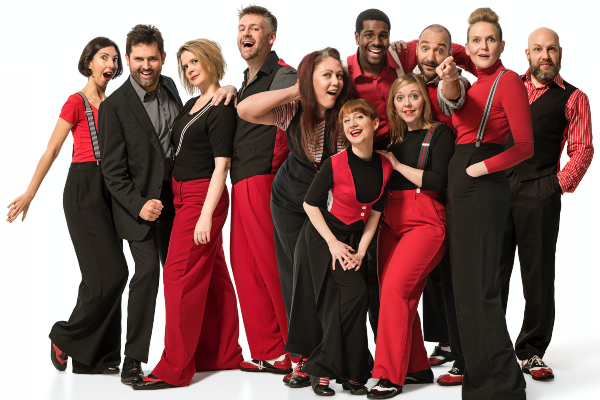 The Showstoppers team rely on their audience’s invention to put together their amazingly innovative shows. And lockdown, where the audience is virtual is no exception. Their latest offering starts with an audience idea – set a musical in a hot air balloon, –  and sure enough the talented team of 7 take off and hit the heights.

Pippa Evans, Adam Megiddo, Ruth Bratt and Justin Brett seem to be able to read each other’s minds as they fashion  a 90 minute musical out of thin air , with the helpful intervention of host Andrew Pugsley. There are regular audience suggestions on story line and the style of songs and the team rise brilliantly to the occasion.

From their opening “ Up, up and away-hooray “ chorus they display magic chemistry and even they seem to surprise themselves about where the complex and delightful story takes them.

Two Jewish couples sail high over New York on the occasion of Maury and Lillith’s 30th wedding anniversary. All is going well then audience intervention – a terrific thunderstorm blows up. Next thing we’ve gone through a gap in time and back 30 years or more when the two couples were young – and so they are once more , the magic taking away their winkles and lack of hair.

In the style of the Boyfriend we get “ Do You Remember The Good Old Days” and in the style of J C Superstar, a rock  song “ There’s a flame coming down from the sky “.

And in this relived past the couples swap partners – a la Sondheim’s Follies . The story develops in fits and starts but their ideas are almost instantaneous and fully inspired by pianist Duncan Walsh Atkins and percussionist Alex Atty.

And the audience continue  to be demanding – next request to be fulfilled is a historic event that will change the world. Maury , back in his old job as a New York cabbie obliges by mowing down  businessman Donald Trump !

I think you’ve got the picture. But the story is well-rounded and the characters developed. It’s also a morality tale tinged with sadness and its very clever ending that doesn’t really end leaves us  with the haunting thought  that their happiness will see them through.

Oh and if you’re wondering who is President in this alternative present ? Worry not, it’s Pierre the gay French glove salesman at Macy’s Department store.

Their next date is an outdoor live performance on the jetty at Battersea’s  Turbine Theatre on 17 September  – tickets at theturbinetheatre.com .

Three cheers for them and 5 stars . You’d be foolish not to catch them when you can