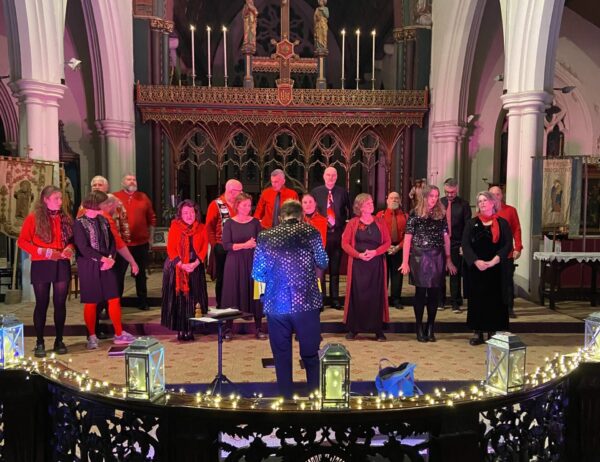 Resound Male Voices and its sister female group Rebelles gave us a quirky, exciting and at times mesmerising intro to the Christmas season.

Directed by Sam Barton, they staged their show at that hidden Brighton gem, St Paul’s in West Street. Singing unseen behind the high altar screen, they then processed to take their places. Lux Nova was classy, smooth and with Rebelles’ top notes, a perfect harmonious start.

The repetitive rhythms of Non Nobis Domine (Powell) built to something quite extraordinary, signalling this is no humdrum carol concert. Voice Of the Bard and Visions Of Gideon, which they earlier for World AIDS Day, were mystical, dramatic and atmospheric.

Ut A Golfio is a dancing song they had learned from the visiting Icelandic men’s choir ESJA, and they gave it a mighty belt. Tanstulaul was also a dancing song, this time from Estonia – and again a joy to hear and watch.

Rebelles gave us a delightful, moody medley by the Gershwins and Two Songs From The Sea, which were sad, haunting and packed with the emotion of a seafaring community. Weeping, a banned anthem sung under apartheid by the ANC, was stirring and gripping and When Thunder Comes, a US civil rights anthem, was defiant, honest and moving.

The second half gave us some Christmas favourites – Carol of the Bells, White Christmas and Jingle Bells, but again it was some more unusual items that made my night. Catch A Falling Star, not the Perry Como schmaltz-fest, but a setting of a John Donne poem, was simply sung and hauntingly beautiful. Britten’s Balulalow – set for children’s voices –  was rendered in a pitch perfect version by the nine members of Rebelles, and the evening ended unusually with Kate Bush‘s Running Up That Hill.

A great musical treat of a night.