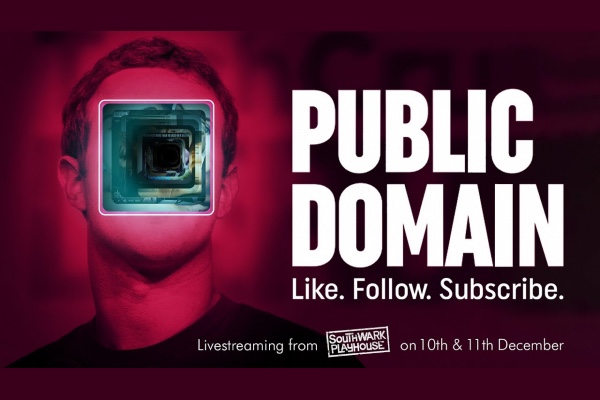 Francesca Forristal and Jordan Paul Clarke  have compiled a stunningly effective analysis of the  evils of social media – entirely from real comments they have harvested from Facebook, Tik Tok, YouTube and Twitter.

Directed with clarity and pace by Adam Lenson, they perform on an  almost  bare stage at Southwark Playhouse but the show is overlaid with complex high tech effects  that are highly reminiscent of the hit musical Dear Evan Hansen.

It’s the world many of us shelter in – the world of influencers, of breaches of privacy, of lost souls looking for friendship.

At the show’s heart is a damning indictment of Facebook’s Mark Zuckerberg and his wife Priscilla Chan. Using verbatim reports of Zuckerberg’s appearances before the  US Senate, it takes the lid of the total lack of responsibility shown by tech companies about the well-being of their employees and their customers.

At the same time it finds a kind of sad humour in some of the influencers and their paltry content that keeps their millions of followers still following.

Both performers play a wide range of characters at break-neck speed and the songs are both relevant and memorable. As they tell us , they revel in “ the friends of our friends” and the feeling of being “ a little less alone “ – even though the show clearly makes the point that the loneliness is still often just below the surface .

A young Zuckerberg tells us “ The future is going to be better than today “ , and while that is true of many connections made on the internet , the show does concentrate on the vacuous, superficiality of much that we view day by day.

One endearing section right near the end of the show is different, though. We get verbatim dialogue from interviews in a home for the elderly and the touching simplicity of the old people’s enjoyment of photo sharing and online chat is a sobering finale to a hard-hittting thought-provoking piece of lockdown theatre.

A recorded performance of Public Domain will stream this week – see southwarkplayhouse.co.uk