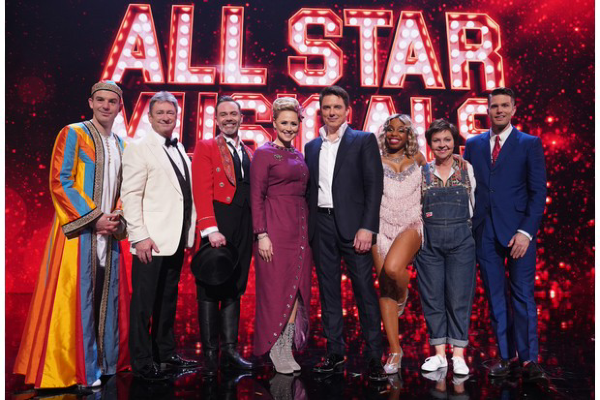 Okay – breathe in Brian and…there was a 24 hour Twitter storm about the one-off resurrection of ITV’s All Star Musicals , so here’s my small contribution to it. I’m a pretty regular watcher of Strictly and I do recall a series where pop stars learnt opera , which was fun in that they were by and large pretty poor at it for obvious reasons.

But ITV’s attempt at the genre where celebrities are taken out of their comfort zone had a major flaw for me – the celebrities were not, well how to put it….. not A-listers.

It was fronted by royalty in the form of queer star performer John Barrowman; legendary Elaine Page led the judges and mentored the contestants and Lord Lloyd Webber appeared to roll out Carrie Hope Fletcher in another sneak preview of his new opus Cinderella. And – most importantly for me -it had a stunning ensemble under the guidance of the brilliant Bill Deamer – of which more later. But…but…but

The “ celebrities “ really weren’t up to the challenge, my dears. It kicked off well enough with Judge Rinder giving us a  full-throated camp Be My Guest from Beauty and the Beast, but then Barney Walsh , son of Bradley , failed to make his obvious charm shine through enough to take on the big brash Flash Bang Wallop from Half A Sixpence.

Jessica Hynes of Royle Family and W1 just couldn’t get the raunchiness of Mamma Morton from Chicago . Dr Ranj  Singh – veteran of Strictly  – professed to do a lot  of singing and he smiled and crooned  his way through a touching ballad Come What May from Moulin Rouge .

Ex-East Ender Luisa Bradshaw-White who told us lovingly about her wife, made a brave shot at the bearded lady from The Greatest Showman and the queer anthem This Is Me – she was feisty, confident but somehow just dull. And then we got the Strictly Anne Widdecombe equivalent : hard-bitten news interviewer Robert Peston truly out of his depth with Luck Be A Lady from Guys and Dolls.

If you haven’t yet watched ,  I won’t reveal who won, though it’s all over social media  , but there were real stars on show here – the ensemble , brilliant in all their song and dance backing routines and choreographed by Bill Deamer, fresh from his direction of the Theatre Channel . Bill led the celebrities through their paces and clearly brought out the best in them , but do you know what would have made this show great ? Forget the crowd-pullers, in this year where musical theatre makers have been jobless and without wages – wouldn’t it have been great if say the 2020 graduates from Arts Ed or another MT school had been given a prime tv spot to showcase their talents ? – Just a thought.

All Star Musicals is on ITVhub for a month. Watch here: