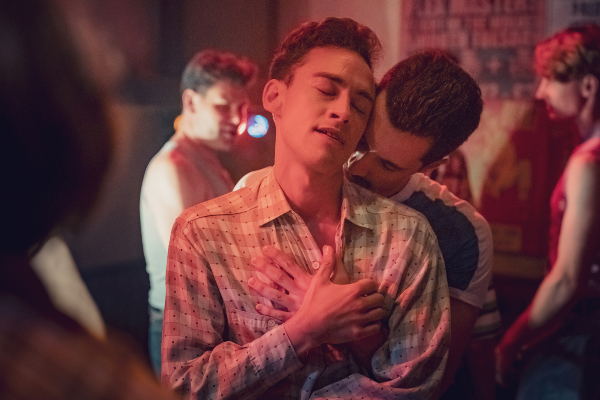 I’m guessing there are two distinct audiences for Russell T Davies moving, darkly funny television re-creation of 1980’s London and the emergence of Aids. First, those of us who were there and lived through the vibrant gay culture of Soho and beyond, lost friends, mourned and eventually moved on. And second, the under 50’s who are by and large dealing with a global pandemic for the first time, and who may not fully grasp the fear, secrecy and guilt that we lived with.

So for some it’s a lockdown social history lesson and for the rest of us a walk down some memory lanes we may have packed away along with our  dubious 80’s wardrobe.

Davies is on top form as he cleverly steers five very different characters into one house and a life together against the background of an emerging mystery illness.

It’s a first-rate acting company – Olly Alexander as the closeted Isle of Wighter who blossoms in the gay culture he plunges into; Omari Douglas as the outrageous drag-dressing builder Roscoe who has to run away from his religious family who try to pray the gayness out of him; Callum Scott Howells as dear sheltered Welsh Colin , befriended by the older gay tailoring assistant Henry, a  beautifully observed performance by Neil Patrick Harris. Then there’s drama student Ash ( Nathaniel Curtis ) who survives casual racism and is Ritchie’s first sexual partner; and finally Lydia West as Jill, the heart-warming glue that binds all the friendships together.

Being Russell T , he comes at it sometimes obliquely and sometimes sublimely – the 80’s soundtrack is perfect – including an extract from Hooked On Classics for a funny conveyor-belt bonking sequence.

But the background which permeates this series from the start is the sombre  and harsh reality of a plague that in this context  stalked the beds of gay men and Davies is brilliant at the slow unwinding of the theme – the isolation hospital scenes are truly cold and horrific – and for those who don’t know – entirely realistic.

The 10-year span of the storyline will give the show scope for developments which I look forward to . You can now binge-watch it all on all4 or watch it week  by week in old-fashioned linear format.

I suspect my generation will find it harder and harder to watch, but it is a must-see.

Less interesting is the social media spin-off It’s A Sin Unpacked , which follows each episode. I’m not a fan of telly pundits and this 30-minute slot adds little more in my opinion, but hey you may differ.

It’s A Sin is on Channel 4 weekly on Fridays