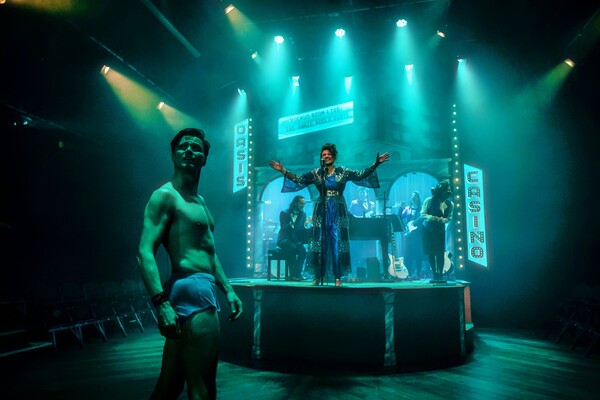 Inspired by Jack Engelhard’s novel, Indecent Proposal takes on new life as a slimmed-down musical version of the controversial story of a rich man who tries to buy one night of passion with a happily married woman for $1 million.

It’s an idea that of ourse is totally unacceptable, yet this version with book and lyrics by Michael Conley and music by Dylan Schlosberg, is a chamber version which deviates from both original book and later film. Its plot is more straightforward and its ending ambiguous but the central dilemna is equally tense.

What Conley is magically good at is injecting his signature dark comedy into the situation. The story centres in this version on a penniless but happy couple who both work at the Oasis Casino – Jonny as an angst-laden country and western singer/songwriter in the cabaret Ruckus Room, and wife Rebecca in the casino’s marketing department, though she also sings with hubby sometimes.

The ceiling in their apartment is coming down bit by bit – indeed landing on us in the audience, the fridge is broken, and Jonny’s daughter by a previous marriage needs paying through college.

We’re being set up with the proposition that money can make you happy or at least give you less worries. Once Rebecca appears to have agreed to the deal, the interest switches to whether her marriage will survive. A side-interest is cabaret compère Annie , who also seeks a benefactor to get a much-needed hysterectomy.

Some of the songs are surprisingly short and could do with further development, but they often catch the mood of the dilemna, with alternating angst, hope, anger and regret. In my opinion the best song is given to Annie – the wonderful Jacqueline Dankworth. Will You Remember is her farewell to the club she’s just been sacked from, but it embodies Rebecca and Jonny’s conflicted feelings and their sense of loss.

The 4-piece band, directed by Connor Going, add a bouncy cabaret-style backing that spreads into scene-change instrumentals. Charlotte Westenra directs the show with quick-fire pace and a punchiness that works in this tight acting space.

Norman Bowman is a haggard, haunted husband with a strong characterful vocal range and Lizzy Connolly plays  the feisty amoral wife with confidence. Her singing is at times too powerful for the small venue. Ako Mitchell is a  slime-ball, smooth, debonair Larry, the wildly confident but reckless gambler who makes the $ 1 million offer as he might any business transaction. His solo song is equally deceiving – starting quiet and shy and ending with a belting crescendo.

Is it an acceptable situation in today’s climate of rights and equalities ? To re-quote Rebecca: “ who the f—- knows? You decide.

Indecent Proposal is at the Southwark Playhouse until November 27. Tickets  – southwarkplayhouse.co.uk