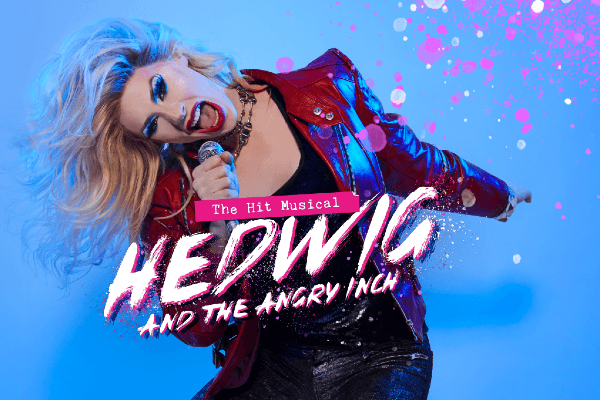 Hansel is a young boy trapped behind the Berlin Wall in 1980’s East Germany. That is until he meets GI Luther who offers to marry him and whisk him off Stateside if he has a sex change operation.

And so begins Hedwig’s rollercoaster life, captured in this 100-minute show which is part cabaret, part narrative,  but all within the confines of a rock concert. Languishing impoverished in a trailer van after Luther dumps her, Hedwig has to plan a new life, with many ups and downs.

Entering high above the back stalls at Leeds Playhouse Drag legend Divina De Campo woos us and wows us in a totally absorbing and brilliant performance that showcases their talent. They are a sort of self-deprecating Marlene – darkly comic, sometimes very rude but always interesting and believable as the front girl for her band The Angry Inch.

The band’s name refers to the physical after-effects of penis removal so Hedwig’s inter-sexuality is always centre stage. Writers John Cameron Mitchell and Stephen Trask have given whoever plays Hedwig a broad canvas to play with and director Jamie Fletcher uses Divina’s huge vocal range, athleticism and height to great advantage and Brighton-based choreographer Mark Smith uses Divina’s suppleness and agility to create movement that flows naturally from the character and the nature of the songs.

Musical director Alex Beetschen keeps the loud and furious pace of the band at maximum, while allowing the quieter ballad-style numbers to get a good hearing. The storyline is intriguing – there’s a second, unseen love interest in the form of huge rock star Tommy Gnosis, whom Hedwig has mentored and written for but who now fails to acknowledge his debt.

But the on-stage love of Hedwig’s life is band front man and offstage husband Yitzhak, played beautifully by Elijah Ferreira. Comedy comes from the difference in height of the two, and Yitzhak is constantly the butt of Hedwig’s vicious jokes, but the relationship works really well. Look out too for the hilarious routine with a 10 foot see-through inflatable Gummy Bear !

The best song to me was The Origin Of Love, which visually and musically depicts the three sexes which Hedwig says exist today-male, female and inter.

The defining final events of the show see Hedwig, wigless, stripped down to underwear and vulnerable yet defiant.

It’s a stunning performance by Divina and deserves to get a West End transfer after its run in Leeds and Manchester. Absolute 5-star entertainment.

The show runs at Leeds Playhouse until 23 April and then at Home Manchester from 27 April- 11 May. Tickets-  leedsplayhouse.org.uk and homemcr.org