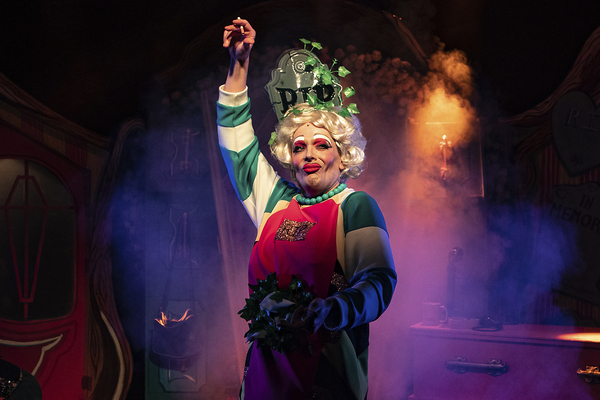 Above The Stag’s adult panto is not for the prudish. Its outrageous sexually explicit dialogue and lyrics could have been written by a bunch of sniggering teenagers, but that aside, it’s a raucous romp through a traditional tale told in an up to date setting- and it’s Queer from start to finish.

The boyish, fresh-faced innocent from Gloucester – Dick ( played beautifully by Jonny Peyton-Hill), finds himself embroiled in a family dispute at Fitzwarren’s Funeral Parlour, overseen by the frigid Cyril ( Bradley Walwyn) and his overbearing and sex-starved wife, the chief embalmer Sarah( Matthew Baldwin). Their larger than life characters are accompanied by crowd-pleaser Alex ( Keanu Adolphus Johnson) who has a neat sideline in vaccine jabbing on the streets of Soho.

There are some great comic touches – the parlour’s slogan is “we put the fun in funerals “, and a coffin bears the banner “Live-Laugh-Love-Die”.

But of course we’re waiting for the villain and what a villain she is – sewer-dwelling Queen Rat, ( a triumphant hiss and boo performance from Nikki Biddington). She has a powerhouse of a singing voice and what a professional debut this is for her. It’s not long before our hero Dick, destined to be London Mayor, is framed for a theft and has to redeem himself – of which there can never be any doubt.

The storyline includes a balloon ride to a holiday island in the Med, where we meet Cyril’s twin brother Cecil, the camp host of Sultan’s Queer resort ( Bradley Walwyn again).

Needless to say ( spoiler alert) the Queen is thwarted, Dick becomes mayor and takes boyfriend Alex as his consort, and off we go into the chilly November night happy and still laughing. Andrew Beckett’s direction is pacy, full of ingenious physicality and Carole Todd’s joyful choreography makes the five performers seem many times more by her use of the limited stage space.

The songs are pretty forgettable, and the backing track music at times too loud, but there’s a traditional audience sing-along that I darent quote save to say its a tongue twister about oral sex with a sailor ! David Shields’ set and George Reeve’s videography are both traditional and vibrantly original. I particularly liked the animation of Trafalgar Square’s lions.

The show plays at Above The Stag, Vauxhall until 16 January tickets at abovethestag.org.uk