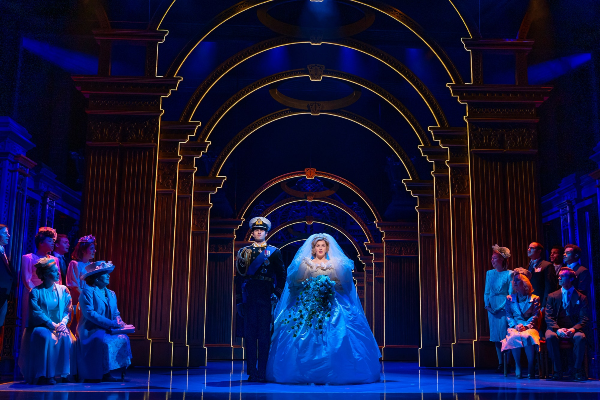 Ken Mandelbaum famously wrote a searingly honest book about 40 years of Broadway flops called Not Since Carrie. If it’s updated then Diana The Musical has earned pride of place, in my view.

Many people’s advance fears that it was too soon to tell the story were combined with equal fears that the result would be a tacky, tasteless farrago that makes The Crown look like War and Peace. Well they are mostly right. I feared all the way through watching it – and it took me two nights and some gin to get through it-  that we would get a death scene.

But we don’t and for that relief much thanks. But oh dear, oh dear the rest of it. Put together by Tony Award-winners Joe Dipietro and David Bryan among others , you might’ve thought it would be money in the bank. It ran for just 2 weeks on Broadway previews before Covid prevented its opening night – including of course its Press Night.

So if  the show is unproven, why on earth would  you rush into a Netflix extravaganza, filmed onstage without an audience ? God alone knows.

Jeanna de Waal is actually not a bad Diana look-alike and she has a pleasing singing voice when the creators of the songs don’t turn her into a ranting, whingeing dumb blonde. Much better vocals come from Roe Hartrampf as Charles and Broadway legend Judy Kaye, doubling as the Queen and romantic novelist Barbara Cartland- the latter played as a grotesque panto dame.

The dialogue is uninspiring, but the lyrics get a full set of turkey awards. They are trite, with childish internal and external rhymes and constant repetition of words to fill out the metre – as in “ a pretty pretty girl in a pretty, pretty dress” or the worst example “ a feckity, feckity, feckity, feckity feck-off dress” started off by an overweight, bearded caricature of valet/confidant Paul Burrell.

Other forgettable lyrics and dialogue include: “snap, click, snap,click – you’re the hottest one he’s had all week ”, and “ Charlie, thanks for all you do, but now you’re spoiling our view”, and “oh darling I’m holding our son , so let me say jolly well done”. And “ Harry my ginger haired son, you’ll always be second to none”, and “ stop being a martyr, can’t you be smarter?’  And  on and on and on.

There are some promising moments  – I like Diana’s first song: You’re underestimated , and Judy Kate’s Queen has an elegiac look back at her youth in An Officer’s Wife.

But on the whole the songs are ordinary, unfocused, too direct. The wobbly bits and pieces of scenery don’t work and the camera angles make the choreography meaningless. Diana’s frocks are great but the wigs throughout look as if they fell from boxes on to people’s heads. And the farcical low point is a shirtless James Hewitt, riding a saddle on a plinth and making a series of dreadful sexual innuendos about horses and riding.

What I sincerely hope is that this doesn’t put theatre-makers off streaming which can work well, and that it doesn’t put audiences off going to see some of the more innovative pieces of theatre that are still being made. The vulture photographers tell Diana to “ dare to look away”, and maybe that’s good advice about this show too.