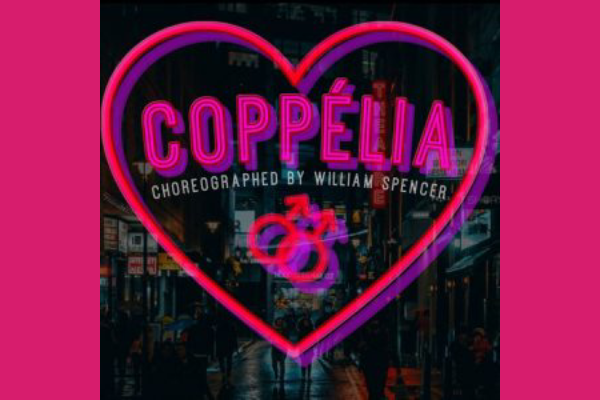 Director/choreographer William Spencer has set his two ballets not in the world of swans or nutcrackers, but amongst the bargain shelves at the supermarket and in the darkest recesses of a Soho sex shop – and it’s all a 5-star blissful evening.

The Supermarket Suite does what it says on the discounted tin : finds its leaps and bounds among shelves and checkouts to the magic best tunes of Tchaikovsky. Two staff enthusiastically and athletically mop the floors and when they open the doors two absolute Queens of boys appear to do their shopping.

Jack Buchanan minces around with his Waitrose carrier but he’s clearly in the wrong place and Lewis Rimmer has high jumps and high disdain for this less than salubrious store.  The final sequence at the checkout is clever, funny and physically brilliant. This 10-minute opener is far too short.

But then we’re in for the dancing night of our lives with the 50-minute adaptation of Delibes’ Coppelia , set here in the drunken streets of Soho and its sex shop in an electrifying modernised score brilliantly put together by Aaaron Clingham.

Hayden Tierney ( Freddie the stag ) and Lewis Rimmer ( Simon the hen ) are on their stag do with  best friend, Max – the hag, played deliciously by Jack Buchanan . After drinking far too much , they break in to Dr C’s sex shop and fall foolishly and blindly in love with his window mannequin.

But when the pervert owner catches them, he has other more physically painful pleasures planned for them.

In a twist to the story Lewis becomes the mannequin brought to life, but he’s not a willing top or bottom for Dr C, played with Gay abandon by Thomas Buckley.

There’s a funny and intricate sword  fight with sex toys and much else to please the eye and Lewis and Hayden have a wonderful pas de deux full of tenderness and grace.

The skill and speed of the dancing is an absolute joy and I never thought ballet could be such fun. It’s  packed with high kicks and high camp and it should get a further outing, if you’ll pardon the pun.

The two pieces are part of a pop-up season by Lambco Productions’ Garden Theatre and not to be missed.

Tickets for the season are at gardentheatre.co.uk