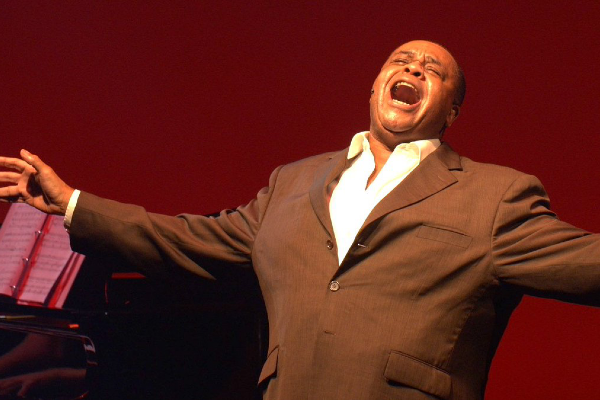 I have been a card-carrying Stephen Sondheim fanatic since my regular pilgrimages to Manchester to see productions of his shows in the 1980’s .

To celebrate the great man’s 90th birthday Chichester Festival Theatre staged a concert in November 2020 when there were still live audiences. Now for his 91st they have streamed a recording of that concert and what a joy it is !

Daniel  reminded us that Sondheim is the only person to have theatres named after him in both London and New York, and in Instructions To The Audience , he sang/spoke that very funny piece with its memorable line “ please don’t fart; there’s very little air and this is art “.

Clive  gave us a gentle giant performance of Not While I’m Around and Hannah  was bluesy, seductive and clear as a bell in Sooner Or Later, followed by Gabrielle in a rapid-fire, feisty rendition of Everybody Says Don’t .

Daniel and Jenna repeated their West End/Broadway roles from Sunday In The Park With George and were absolutely marvellous as annoyed painter and fidgety model. Daniel confided that they’d worked on their songs with Sondheim and he was still giving them notes on the show’s final night.

From Company we got  The Little Things You Do Together – the perfect observation of the married state from a gay composer who’s never been in it. And Clive was wistful and romantic in Sorry Grateful , with its oh so clever lyrics like “ nothing to do with, all to do with her “ . Daniel was clever/sad in the insightful Marry Me A Little – as he sings “I’m ready “, but clearly isn’t.

And the night had so many other delights – the mad patter song Getting Married Today, a reverse gender version of Giants In The Sky from Gabrielle, and a glamorously wicked witch from Hannah in The Last Midnight -“I’m not good, I’m not nice, I’m just right “.

And Hannah was mesmerising in her mostly spoken version of Send In The Clowns . Old Friends/Like It Was from the show that goes backwards – Merrily we Roll Along – was sad, elegiac and beautifully sung by Daniel and Jenna . And Daniel roared through the breathtakingly fast patter of Franklin Shepherd Inc as a crazy man on a tv chat show. Superb.

Losing My Mind is one of those classics that it’s  difficult to find something new in, but Jenna held us on every note , simple and so effective. Another gender swap gave us Clive Rowe as Broadway Baby – it was funny and somehow it worked.

The poignant finale was With So Little To Be Sure Of and let’s hope in this at least they’re wrong and we’ll all be applauding in a darkened auditorium very soon.

Leading a trio  from the piano , MD and arranger Theo Jamieson had a magic touch all night.

To check on other streamed shows at Chichester go to cft.org