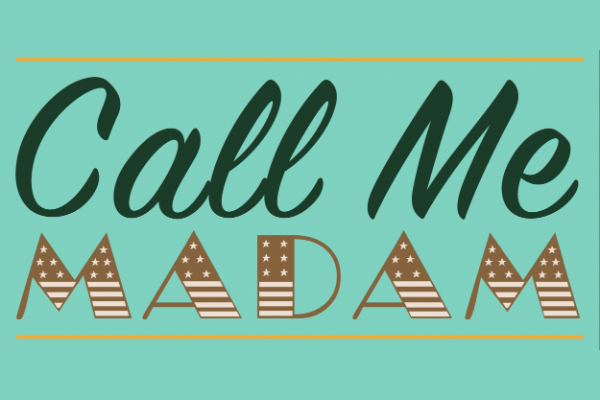 A petty war of words between Republican and Democrat politicians, a shaky foreign policy and the belief that the USA can buy influence anywhere in the world  – Trump’s America ? No. It’s the fictional story of a US millionairess sent to the quaint  but poor duchy of Lichtenburg in 1950. And we’re in musical Theatreland.

Uptairs at the Gatehouse in Highgate, London has revived Irving Berlin’s Call Me Madam and it’s a big-hearted show in a small space. Its leading character Ambassador Sally Adams is right royally served up by West End star Rosemary Ashe in a gutsy full-throated performance that rules over all she surveys.

She hits home run after home run with songs that require a belting voice rather than subtlety – made famous by Ethel Merman, but she also gives us a wry, wicked sense of humour and fun and Rosemary is clearly enjoying every minute of the show – and so are we.

It’s a sentimental, old-fashioned storyline , with two blossoming romances that hit the buffers due to protocol but where we always know all will be well in the end. ‘Allo, ‘Allo star Richard Gibson is an easy-going foreign politician with a light singing voice that sits well with Berlin’s clever but touching lyrics. Daniel Breakwell and Beth Burrows are perfectly matched as the bashful junior diplomat and the feisty but naive foreign princess.

The four-piece band, directed by Jessica Douglas support the songs with a delightful sound, though of course we lose the lushness of a full orchestra.

There are one or two songs you’ll recognise in a variably interesting score – notably It’s A Lovely Day Today and  the tricky counterpointed duet You’re Just In Love.

The acting area in this studio space above a well-known North London pub is a wide but not very deep long strip and the movement tends to be a bit corridor-like but choreographer Aimee Leigh has some clever solutions for this cast of nine and the action is brisk and uncluttered in Mark Giesser’s direction.

The show runs until 10 October – tickets at upstairsatthegatehouse.com