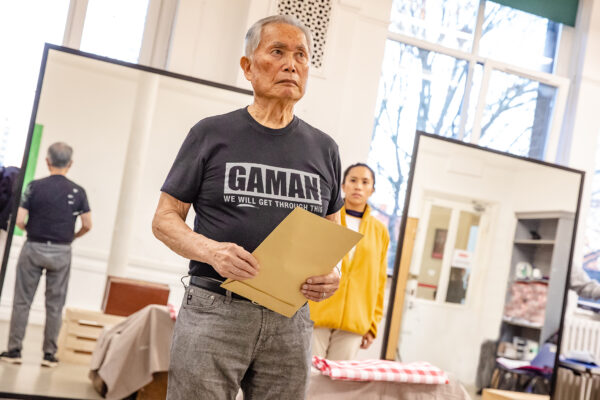 LGBTQ+ activist and Star Trek legend George Takei this week makes his West End debut at the age of 85.

He will star in George Takei’s Allegiance – an uplifting musical story inspired by his own World War II experience in a U.S. concentration camp, when he was barely five years old. After the bombing of Pearl Harbour, Californian-born Takei and his family were placed behind the barbed wire enclosure of a U.S. internment camp, along with 120,000 other Japanese Americans, who had done nothing more wrong than being part-Japanese.

Years later, at the end of the war, Takei’s family returned to their native Los Angeles. Inspired by this difficult and often overlooked chapter of American history, Takei developed this biographical piece of musical theatre. It’s an epic story of love and heroism, and he starred in it alongside Tony Award-winner Lea Salonga and Telly Leung (Broadway’s Aladdin and TV’s Glee).

Following its world premiere in San Diego in 2012, the show ran on Broadway from 2015-16, giving George his Broadway debut. Now the show gets a more intimate and new production conceived specifically for London’s Charing Cross Theatre.

Takei, who played helmsman Mr Sulu in the iconic series Star Trek, came out late in life – because, he says, he would not have had any sort of acting career if he’d revealed his sexuality at the time Star Trek hit the screens – 57 years ago. He’s quoted as saying: “ I felt indebted and guilty protecting my career – others sacrificed their careers to the cause of gay activism.

” I owe them a great debt and I lost so many friends to AIDS and I was till closeted. I wanted to contribute and I did it initially with my chequebook.”

Since those days, George has become an outspoken and influential activist for queer rights.

The show runs January 7 to April 8. For tickets, CLICK HERE

Look out for my review of the show later this month and my feature-length interview with George – both in Scene.