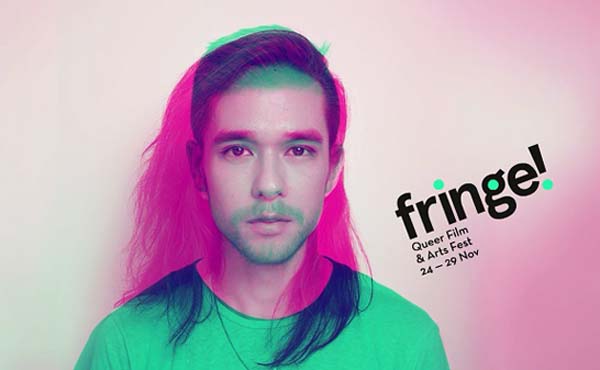 London’s queer film and arts festival, Fringe!, returns for its fifth year with over 60 events across six days, including screenings, talks, panels, workshops, performance and parties, taking over 14 venues in East London.

Fringe! is a not-for-profit festival run by a team of passionate volunteers and rooted in London’s queer creative scene. From feature films to experimental art, workshops to interactive walks and wild parties, Fringe! Queer Film & Arts Fest 2015 has something to tickle every one of the senses.

Fringe! Fest was launched in 2011, by a group of queer creatives as a community response to arts cuts carnage. Their mission was to offer a dynamic, representative and unmistakably fresh alternative to other film and arts festivals.

This year’s festival features an international focus, with representation from over 20 countries, and brings a packed programme of the most thought-provoking and cutting-edge new work from across the globe.

This year Fringe! hosts screenings and events at familiar festival venues including Hackney Picturehouse and Hackney Attic, Rio Cinema, Ace Hotel, Dalston Superstore and Rose Lipman Building, which returns as the festival hub with two screens, an exhibition space and the festival cafe.

Inspirational rugby documentary Scrum, directed by Poppy Stockell, follows the lives of three men as they compete for a position on the team for the Bingham Cup 2014 – an international gay rugby tournament named after athlete Mark Bingham who died on United flight 93, on 11 September 2001 (November 27).

Director Chris Belloni’s The Turkish Boat is a documentary on the first ever Turkish boat that took part in Amsterdam’s famous Gay Pride Canal Parade and follows Turkish-Dutch gay activists Döne and Serdar in their attempt to gain recognition and acceptance within the Turkish community (November 28).

For the first time, this year Fringe! features full-length staged performance and a focus on technology, art and the body, including:

In The Lady’s Not For Walking Like An Egyptian, performance duo Mars.tarrab explode, expand and explore political texts and pop lyrics by 1980s female pop icons to ask questions about power and influence, the female voice, memory and seeing your Dad in tears on election night 1979 (November 26).

Baby Lame’s show Video Nasties is an interactive celebration of the bizarre and the grotesque featuring the capital’s most exciting cabaret performers in a programme of performance/lectures, happenings, films, games and late-night dancing (November 28).

Portuguese post-porn performance collective Quimera Rosa’s Sexus 3 aka The Violinist questions socially constructed binaries, mixing scenes of cyberpunk surrealism with non-conventional sexual practices in which the performers transform their bodies into instruments through electronic prosthetics. The piece references both Elfriede Jelinek’s The Piano Teacher and Donna Haraway’s concept of the cyborg. Additionally to the performance, Quimera Rosa will also run two workshops prior to the show (November 29).

In addition to post-screening conversations and Q&As, Fringe! is hosting topical panels on ongoing debates on the disappearance of queer spaces and gentrification (November 28),  LGBT immigration (November 29) and the provision of PrEP (HIV pre-exposure prophylaxis) through the NHS (November 29).