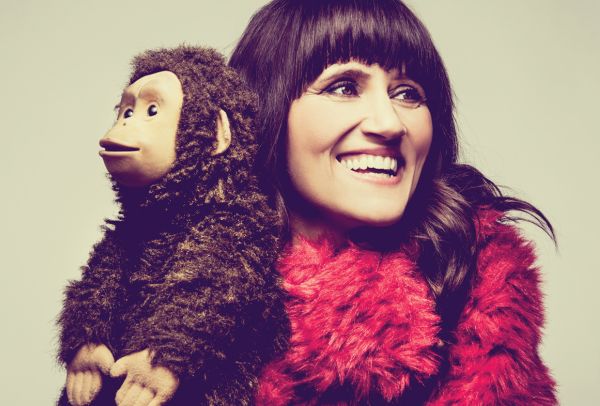 Nina Conti is a supremely talented comedian. She started out as an actress in the Royal Shakespeare Company before she turned to comedy. Theatre director Ken Campbell was responsible for her career change, inspiring her to become a ventriloquist.

It paid off. In 2008 she won the prestigious Barry Award at the Melbourne International Comedy Festival for her solo show ‘Complete and Utter Conti’. Ventriloquism may seem old fashioned, calling to mind Keith Harris’ duck Orville, who wanted to fly right up to the sky but couldn’t. Nina has taken ventriloquism to another level with her signature grumpy monkey.

On 30 November, Nina Conti brings her brand new show, The Dating Show, to Brighton Dome. We caught up with her to find out more.

What can we expect from your latest show? “To avoid it becoming this hetero-normative thing, you want to get everyone involved. In the Soho shows, I opened with Monkey interviewing a bunch of people in the audience, and whoever elicited the most warmth was the person I went with. I’m not after eccentrics, just likeability. Then we got them on stage and put a mask on them, and had a very low-key chat about their past relationships and what they were looking for next. Hopefully those we get up could be any kind of person and not just the Cilla Black demographic.”

Ventriloquism seems like a lost artform. You seem to have cornered the market though. “I’m lucky to have found it, because I never thought that ventriloquism was a skill worth having. I would never have gone to a ventriloquism show, and when it was suggested to me by Ken I was so uninterested in it. I thought he was mad! I don’t know if I’ve enhanced it for nostalgia, but there was a definite lightbulb moment. I had been practising with those awful mannequins, and it was so end-of-the-pier and saucy: I didn’t like it. But then I remembered this monkey puppet that I stole off a mate, and I wondered if his mouth could move; I had to take some stuffing out and put my hand into his face, and then as soon as he started to talk, I thought ‘woah! Everything you’re saying is coming from a wider place than my own head.’ It was a really good feeling.”

Although Nina’s monkey has become a cult figure, no other comedian has been inspired to take up ventriloquism. “I’m delighted to be out on my own, though I have a feeling that there’s one coming . . . I don’t actually think the ventriloquial aspect is my show’s best selling point. It’s a side issue that needs to be overcome given it still has a bad rap. I don’t think people leave my shows thinking, ‘oh that was a good ventriloquist show’. I think you can forget it’s a ventriloquist show; I know I do, to the point where later I think, ‘oh, did I do the ventriloquist bits?’ I can get a bit carried away.”

Are you hoping to help your audiences find true love? “First and foremost, it’s a funny show; I’m not actually trying to match-make. It would be very funny if it actually worked out for anybody. The first time I did Live At The Apollo, I got a couple up and there seemed to be romance in the air, but I suspect they filed out of the theatre their separate ways. But I’m putting songs in. I did an improvathon with the Showstoppers guys, making a song up as we go. I’m really bad at singing, but it’s funny when the date breaks into song. And it turns out that a bad song is better than no song!”

Nina Conti – The Dating Show is at Brighton Dome on Tuesday 30 November at 7.30pm. Tickets available from brightondome.org or by calling 01273 709709.