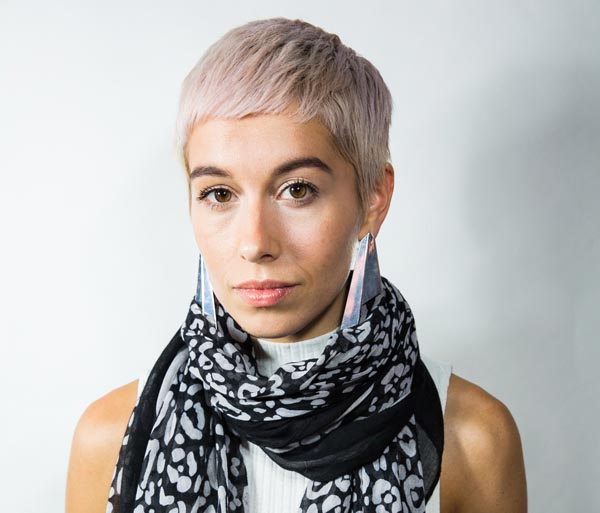 Following her heroic appearance representing the UK at this year’s Eurovision Song Contest in Lisbon, Hugo Michiels chats to SuRie at Bar Broadway where she was making an exclusive appearance to celebrate their fourth birthday.

Welcome back to Brighton! Is this your first time back in town since your appearance at Eurovision: You Decide at the Dome? Yes, it’s my first time back since February. It’s a lovely feeling being back and great to be at Bar Broadway.

Describe yourself in three words? Small but mighty.

You graduated from the Royal Academy of Music in London, what did you study? I took a post-graduate theatre course, focussing on my voice, with lots of dance and acting. Anything for the stage really.

Most people will know you from this year’s Eurovision Song Contest. Fewer will actually know you as an accomplished jazz singer? I wouldn’t say accomplished, but when I first moved to London I did earn my keep singing in many jazz lounges in and around the city. Basically anywhere with a piano, hotels, promenade bars and clubs.

Who and what are your musical influences? I have a wide range of influences, but I really love all those piano singer-songwriter storytellers, especially Tori Amos and Billy Joel. Emiliana Torrini is an Icelandic singer songwriter who I adore.

When I was growing up I listened to the jazz greats as my dad used to play lots of Nina Simone and the Motown artists. More recently, the last recording I put out was influenced by Australian singer-songwriter Ry X, and I also love the Danish singer-songwriter Agnes Obel.

Who is your favourite lesbian icon? That’s tricky, I am thinking about various icons but not about their sexuality. It’s not something I’ve paid great attention to (laughs). I wouldn’t know if my icons are gay or straight.

Let’s turn the question around, whether you’re gay or straight, who would your role model be. Someone who inspires you? I love Tilda Swinton. I’ve no idea if she’s straight or gay but I think she’s fabulous.

Following on from my Gay and Lesbian Icons question – you have been widely compared to a younger Annie Lennox… Funny, that is what I was originally going to say to your previous question. Annie Lennox is amazing and was a musical hero of mine  when I was growing up. Someone not conforming to the norm and not caring about that. Just being who she wanted to be, dressing however she liked. The whole androgynous thing is very much my kind of thing as well. I adore Annie Lennox and when the comparison was made I was very flattered.

What’s your guilty pleasure? Many people know it is Battenberg Cake. On the tour I have been on for the last two months, my lovely fans brought me Battenberg at every single stop, I can’t cope with it anymore. It keeps me awake at night, as sugar is my thing. (Laughs).

Moving on to Eurovision 2018. What was it like to be part of a show watched by 186 million people around the world? It’s an amazing amount of people and I can’t quite process that. When you are on stage and hitting your camera marks, you sing down the lens and know your job is to connect with as many people watching at home as possible as well as the many tens of thousands of people in the arena.
The electrical charge that audience generated on the night was quiet inspiring and it was only then I realised the magnitude of how many people were watching at home.

Did you get the chance to enjoy Eurovision as well as experiencing how big everything around the event is? I did, I really did. We went to Lisbon the week before and had so much fun. We were supported very well by the organisers and the production team in Lisbon put on an incredible show.
All the technical rehearsals were brilliant and I made friends with the support team and the fans who were there all the time supporting me. Whenever I got off the bus at the arena, the hotel, and back again, they were constantly cheering, smiling and singing.

There was relentless amounts of positivity in that city. Lisbon is incredible with the most amazing atmosphere. I can’t start to describe how much fun I had.

You worked with Loïc Nottet from Belgium at Eurovision 2015, and last year with Blanche, who both ended up coming fourth? Yes, with Loïc I was part of his backing vocal team. I just helped more behind the scenes with Blanche. Both times were incredible. I have amazing memories of working with the Belgians.

Do you think having been part of two previous Eurovision Song Contests helped you prepare for this year? I think it gave me an insight into Eurovision as a production when I was on stage with Loïc that first year when the magnitude of it all really hit me. Of course, I was a backing vocalist and dancer so the pressure was slightly off us from a media and press point of view.

I don’t think anything can prepare you as the lead artist who is representing your country, but I definitely had an insight into the whole machine, the wonderful thing that is Eurovision.

There is a campaign running to ask the BBC to invite you to perform again next year. If they said yes, would you do it again? I would definitely consider it because it is such an amazing event to be a part of. I haven’t heard anything from the BBC, but then they probably all need a bit of a break after what happened this year as well. I would definitely consider it if I was asked. Never say never I say.

We must briefly touch on the events that unfolded during your performance in Lisbon when a stage invader took your microphone. I can’t imagine how stressful that was, but you did look very calm and composed. Can you remember what went through your mind? It happened very quickly, I didn’t even see him coming as I was inside a light installation that was built on stage. It was very bright and I was totally focused in that moment on the camera that I was performing to. As soon as he was there the security were on him pretty quickly.

What got me the most was the fact he started shouting into my ear monitors that had been set for my vocals and the track. The noise was very loud and for a few moments I was very confused. I didn’t hear what he actually said, but it was really disorienting. The only thing going through my mind was to carry on. The performer instinct in me kicked in.

We had been preparing for that three-minute slot for so many months and we wanted everything to go the way we had planned it. So, for someone to interrupt in any way and disrupt our focus was not in the game plan. It was a horrible feeling.

The crowd was behind me and were so supportive and kind. Weirdly, when security wrestled the guy away from me the microphone came out of his hand and landed by my feet again. The camera had cut away so all I did was step forward, pick it up and carry on singing.

You came back with a vengeance to finish the song. Do you feel in hindsight that not singing again was the right decision? It was a collective decision by us all. When I saw the reaction of my team back stage, how proud and resilient they were, we all decided together that we couldn’t repeat that. In hindsight, we didn’t know how many people actually saw what happened, but at the time we believed that the spontaneity of the reaction couldn’t be repeated. If we went again I might not have had the fire in my eyes and belly for the last part of the song.

Your new single Taking It Over is out now and available on iTunes and Spotify. How has it been received? Really well thank you. It was a lovely recording to release after Eurovision and it’s been nice taking it to Pride festivals around the country where reaction to it has been very positive.

Is there an album in the pipeline? It’s coming, soon. I’m writing it at the moment. The past few months have been really busy with Eurovision. The tour I went on straight afterwards, only finished last week. Two months of meeting wonderful people and playing with my incredible band live on stage was really special – now that’s finished I’m getting my head down to finish the album and bring it out as soon as I can.

If anyone was thinking of entering Eurovision, would you recommend it and what would be your advice? Oh, for sure, absolutely. It’s such an amazing event to be part of. It’s hard to advise people but I’d say go for it and just enjoy the experience.