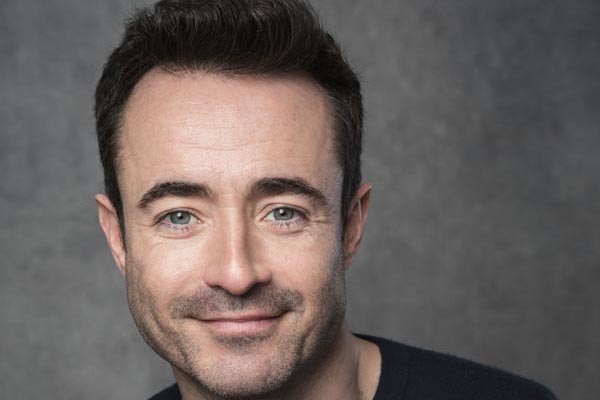 Joe McFadden, winner of Strictly, star of TV’s Heartbeat and Holby City talks to Brian Butler about his forthcoming lead role in Priscilla, dancing with Katya, and learning the hard way.

JOE McFadden knew at 12 years old that he wanted to be an actor. His drama teacher got him an audition for the hit TV detective series Taggart, followed by a young starring role for 6 years in the popular Scots soap opera Take the High Road. “I thought to myself : this is great fun” he says with his infectious smile and warm Scottish accent.

He admits that he should have gone to drama school: “But I wasn’t brave enough. I learned the hard way – by doing it.”

And the high-profile jobs kept coming – 2 years in the period police series Heartbeat and 4 years in the medical drama Holby City. “The shows had very different style. Heartbeat was all about the look and the pop music sounds of the 1960’s, Holby is obviously a modern look at an NHS hospital. As such it has to be as authentic as possible – lots of doctors and nurses watch it,” Joe says.

“There’s tremendous attention to detail, with medical advisers on the set all the time.” Joe says he even went to watch open-heart surgery for real to get into his doctor role. “People in the know are waiting for you to make a mistake so it’s important not to.”

“What I realised is how powerful these people are. I was playing an arrogant character – but I realised that life and death was in my hands. It gave me more respect for medical staff and the pressure they are under. I couldn’t do it for real.”

He has starred in film, TV and on stage so what’s his favourite medium? “I’m fortunate I get to do all of the above. People see you in one light and that’s it , so varying the roles is great.”

Self-taught in his skills he did take some singing lessons in his native Glasgow, where he had friends studying musical theatre .

At the age of 22 he landed a role in the musical Rent. “I was amazed I got the part. I never saw myself really as a singer, and it helps that its was more an acting show.” But musicals were to form an important part of his career, including She Loves Me at Chichester.

So how did his participation in Strictly come about? He admits that someone on the Holby production team was keen for one of its actors to be in the dance competition. “I said absolutely not. But I was worn down. The first time the BBC approached me I said no. Then I had a good think about it. So I met the producers. They don’t tell you all the intricacies, that your life will change and about the press intrusion.”

For the run of the show in 2017 it took over Joe’s life. “It depends how good you want to be. I didn’t want to embarrass myself, and with Katya (his professional dance partner and teacher), it’s full throttle. So we rehearsed 9 or 10 hours a day. Some days I got to the point where things weren’t going in and Katya would send me home.“

When did he realise he had a chance of winning and lifting the famous glitter ball? “I didn’t, not even in the final week. I was concentrating on myself; the others were such good dancers. I thought; how lucky are we to get to the final.“

But win he did of course, and the TV series was followed by a month-long stage tour of the show and finally a cruise.

And after other stage appearances, Joe is now embarking on a UK tour of Priscilla Queen of the Desert, with a 3-week stint in Brighton over Christmas 2019.

“I met Jason Donovan on the tv show Loose Women and later on producer Mark Goucher. They offered me the role that Jason had played – Anthony – ‘Tick’ whose stage name is Mitzi. Jason who is co-producing this version, says it’s going to be more like the original movie – grittier than the stage show usually is.”

“Mitzi is a great character, and as the show develops we learn his great secret – he has a wife and son. There’s a lot to the character. He jumps about on the stage and then he also has scenes where he is forging new ground with his newly-found family.”

So with just 6 weeks rehearsal, how does he feel? “I’d never done drag before, though I know some drag queens  I was slightly worried. I take my hat off to full-time drag acts. Just standing in the high heels killed me, let alone dancing in them.”

What advice would he give to a young Joe just starting his acting career? “I’d tell him not to worry so much. I fretted about not going to drama school, but then I realised we are all just making it up as we go along. All this stuff is small stuff.”

What roles would he like to tackle in the future? “The MC in Cabaret. I did a samba to the music from it in Strictly. I think it was my best dance. And Bloom the nervous accountant in The Producers.”

Having just finished a major tour of Brighton-based Peter James’ The House on Cold Hill, where he ‘died’ on stage very night, Priscilla is making a change. “Its’ a feel good show.“

Priscilla runs at the Theatre Royal, Brighton from December 17 to January 4 2020.