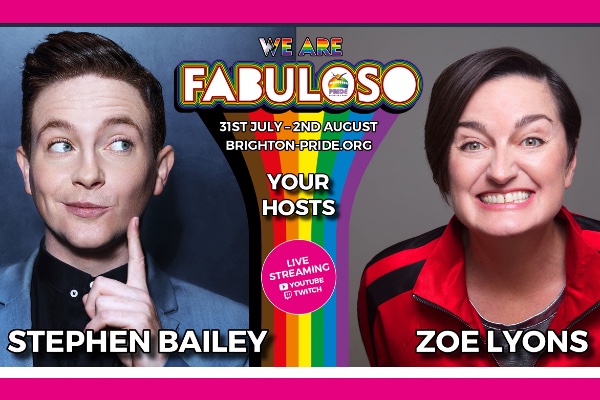 Brighton & Hove Pride has announced comedians and broadcasters Stephen Bailey and Zoe Lyons will host We Are FABULOSO!, Brighton & Hove Pride’s Digital Festival live from a purpose-built studio on Saturday,  August 1 with pre-records from Stephen and Zoe for the Warm-Up Show on Friday, July 31, and Highlights Show on Sunday, August 2, 2020. All shows will be streamed on the Brighton & Hove Pride website, YouTube, Twitch and other platforms TBA.

Stephen Bailey is a cocktail of class, caring and comedy, with the most flamboyant umbrella to top it all off. He is a comedian, presenter, television personality and writer, whose friendly and open brand of gossipy humour has made him one of the UK’s most exciting up-and-coming comedy acts and an in-demand talent for all things showbiz/entertainment.

Currently, he is the narrator of ITV Be’s Ferne McCann: First Time Mum, the host of Takeshi’s Castle on Comedy Central, and has done loads of other telly including The Apprentice: You’re Fired, Live at the Apollo, Mastermind, Coronation Street and Good Morning Britain… but he still cannot get on Strictly.

Zoe Lyons has been a regular on the comedy circuit for many years and runs and hosts the very popular Bent Double night at Brighton Komedia. As well as many regular radio appearances, her television appearances include Have I Got News for You, Celebrity MasterChef and being a series regular on Mock The Week, Live at the Apollo, The Apprentice: You’re Fired, Room 101, Hypothetical, Dave Gorman’s Terms and Conditions Apply, Pointless Celebrities, and winner of Celebrity Mastermind.

Marking 30 years of LGBTQ+ campaigning, protest and celebration while helping raise essential funds for our LGBTQ+ community groups, We Are FABULOSO! will feature live, recorded and archive footage of local and international artists, performers, activists and DJs.

As with every Brighton & Hove Pride, the day itself will kick off with a ‘virtual’ LGBTQ+ Community Parade featuring a procession highlighting the amazing work of our essential community groups and charities.

Brighton & Hove Pride has hosted some of the world’s biggest artists, including Britney Spears, Kylie, Pet Shop Boys, Grace Jones and many more, and viewers will be taken on a virtual tour of the Pride Festival in Preston Park site to drop in at all the stages and tents to sample the atmosphere and flavour of this jewel in the LGBTQ+ crown as well as looking at highlights from years gone by.

Live audiences via Zoom will provide colour and atmosphere for most segments and anyone can apply to be onscreen at www.brighton-pride.org/audience-wanted/

With an extensive schedule of events centred around the original Pride weekend, there will also be a host of online warm-up events and house parties to get you ready and in the mood for the main We Are FABULOSO! digital festival!

All the entertainment will be free to view so viewers across the world should start planning their Pride parties now. Whether from the comfort of your own homes or gathering a group of friends in the garden; as lockdown restrictions are relaxed, it is hoped that some bars will be able to stream the festival live on big screens too. A full schedule will be released nearer the time so viewers can plan their day.

Paul Kemp, Director of Brighton Pride, said: ‘Brighton & Hove Pride is such an important community fundraiser for our LGBTQ+ groups and to not have a Pride event this year really affects our ability to raise these essential funds and could seriously jeopardise the future of some groups. We really hope everyone gets behind this fundraising effort.

‘Brighton & Hove Pride is a time to come together to celebrate and embrace diversity and inclusion in our great city, and just because we are not able to meet in person doesn’t mean we can’t support and celebrate our fantastic LGBTQ+ communities.’

Brighton & Hove Pride’s sole ethos is to promote respect within our community and support local charities and causes through fundraising. In the last six years they have raised over £920,000 for neighbouring charities, projects and community groups, distributed through the Brighton Rainbow Fund and Pride Social Impact Fund.

Viewers are encouraged to make a donation so Brighton & Hove Pride can continue its essential fundraising for our community organisations that provide so much support throughout the year.