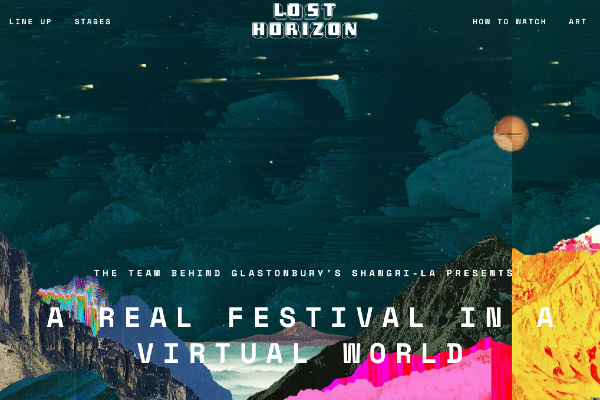 Lost Horizon, the team behind Glastonbury’s Shangri-La, in partnership with VRJAM and Sansar, has announced its SHITV (Shangri-La International Television) programme to raise money for The Big Issue and Amnesty International.

The festival, which takes place 3pm to 3am on Today, July 3 and Saturday, July 4, features an interstellar line up of superstar DJs, underground acts and visual artists, including LGBTQ+ talent, including:

The SHED: Curated by Moses Powers, for the first time in 2019, Shed is Shangri-La’s all-inclusive micro venue dedicated to intersectional positive masculinity. A place where visitors shed old notions, stereotypes and the restraints of masculinity at the door, entering into a space free of toxicity and worldly pressures. Especially for Lost Horizon, SHED presents a playlist of short and beautiful films exploring its themes.

THE CHATEAU present OTHER VOICES by SWEAT MOTHER: Sweat is an artist and filmmaker located in London. Other voices demonstrate the importance of trans representation during the current political climate as it touches briefly on the many identities that are facing transphobia, oppression, violence and harm.

VOGUE FABRICS DALSTON present VFD LIVE: Welcome to the digital home for the queer, QTIPOC, neuro divergent, differently abled and intersectional artists, musicians, performers, communities and activists that VFD support. This broadcast highlights the intersectional causes we hold dear such as trans rights, anti-fascism and BLM. It features the explosive energy of the activist group Transmissions, gives a taste of ‘every we wanted to be’ and the surreal genius of Lewis G Burton‘s Hermaphrodite.

107 HOURS: Theatre-maker, entertainer and performance artist Harry Clayton-Wright portrays a politically indifferent but glamorous teenager, Rebecca, who has locked herself in her bedroom – with her wild child friends – for the entire duration of the festival. The film chapters the anarchic revelry and immediate descent into chaos. It was described as ‘A drag Trainspotting meets David Blaine in a wig.’ by Gay Times.

For more info and the full programme, visit their website